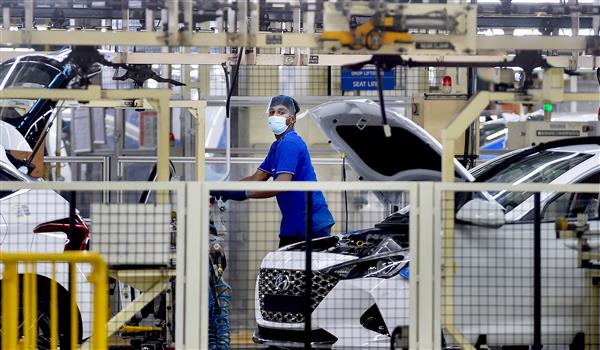 Industrial production grew 11.9 per cent in August mainly due to a low-base effect and good performance by manufacturing, mining and power sectors that surpassed the pre-Covid level.

The manufacturing sector, which constitutes 77.63 per cent of the Index of Industrial Production (IIP), grew 9.7 per cent in August, according to the data released by the National Statistical Office (NSO) on Tuesday.

The mining sector output rose 23.6 per cent in August, while power generation increased 16 per cent.

The data showed that industrial production recovered and surpassed the pre-pandemic level of August 2019.

Industrial production plunged 18.7 per cent in March last year following the Covid outbreak and remained in the negative zone till August 2020.

The IIP had recorded a contraction of 0.6 per cent and 3.2 per cent in January and February this year, respectively. In March, it grew 24.2 per cent.

For April, the NSO held back the release of complete IIP data.

The factory output grew 11.5 per cent in July this year.

The second wave of the pandemic started in the middle of April this year, and many states imposed restrictions to curb the spread of coronavirus infections.

“The growth rates over the corresponding period of the previous year are to be interpreted considering the unusual circumstances on account of COVID-19 pandemic since March 2020,” the NSO said in a statement.

The government had imposed a nationwide lockdown to contain the spread of coronavirus infections on March 25, 2020.

The manufacturing sector had recorded a contraction of 7.6 per cent in August 2020. The mining sector output fell 8.7 per cent in the same month.

The electricity generation had declined 1.8 per cent in August 2020.

The output of capital goods, which is a barometer of investment, grew 19.9 per cent in August 2021. It had witnessed a contraction of 14.4 per cent in the year-ago period.

Consumer durables manufacturing increased 8 per cent in the month under review against a decline of 10.2 per cent in August 2020.

Consumer non-durable goods production grew 5.2 per cent in August over a 3 cent contraction in the year-ago period. PTI