India, US to work on ways to export mangoes, pomegranates to America 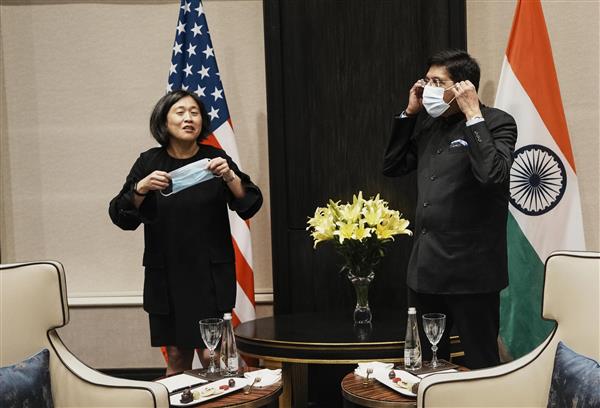 India and the US on Tuesday agreed to work on ways to export mangoes from India as well as to import cherries from America, during the meeting between Commerce Minister Piyush Goyal and USTR Katherine Tai where various other trade matters also came up for discussion.

In signs of further improving bilateral commerce ties, Goyal and the US Trade Representative Tai co-chaired the 12th ministerial-level meeting of the India-US Trade Policy Forum (TPF), which met for the first time in four years.

To facilitate exports of mangoes and pomegranates from India, the US would finalise the transfer of the pre-clearance programme/regulatory oversight of irradiation for both the fruits to Indian authorities soon, a joint statement issued by the two countries on the TPF said.

Both the countries are also looking forward to signing a system for the export of pomegranate arils from India to the US.

Similarly, India intends to finalise the phyto-sanitary certification process which will allow the import of US cherries and alfalfa hay for animal feed into India.

“In addition, the US agreed to work to complete India’s request for table grapes access to the US, and India agreed to work to finalise the mutually agreed export certificate to allow the importation of US pork and pork products,” it said.

During the meeting, India asked for restoration of GSP (Generalised System of Preferences) benefits to Indian exporters on which the US side stated that this could be “considered”, the statement said, adding that both the ministers exchanged views on potential targeted tariff reductions.

The ministers welcomed the agreement to finalise work on market access facilitation for “mangoes and pomegranates, pomegranate arils from India, and cherries and alfalfa hay for animal feed from the US,” it said.

Both sides also expressed satisfaction over the robust rebound in bilateral merchandise trade this year (January–September 2021), which showed almost 50 per cent growth over the same period in the previous year.

The bilateral merchandise trade in the current year is poised to surpass the USD 100 billion mark, it added.

To further promote trade, the two ministers expressed an intent to continue to work together on resolving outstanding trade issues as some of these require additional engagement in order to reach convergence in the near future.

“They agreed further to utilise the revitalised TPF and its Working Groups as a means of rapidly engaging on new trade concerns as they arise, and that they would take stock at quarterly intervals to evaluate progress in this regard,” the statement said.

The ministers also agreed to work together on issues of child labour and forced labour in global supply chains in order to promote resilience and sustainability.

On the pharma sector, the US acknowledged India’s concerns regarding delays, arising from the Covid pandemic, in US regulatory inspections of Indian pharmaceutical facilities.

The US Food and Drug Administration (FDA) continues to evaluate COVID conditions and is conducting prioritised inspections when there is minimal risk to company and FDA officials.

On visa issues, India and the US decided to continue their engagement and acknowledged that the ongoing discussions on a Social Security Totalisation Agreement and welcomed further engagement on pursuing such an agreement.

It is a long pending demand of India for early conclusion of the totalisation agreement or Social Security Agreement with the US. It aims to protect the interests of professionals of Indian-origin who contribute more than USD 1 billion each year to the US social security. Under this pact, professionals of both the countries would be exempted from social security taxes when they go to work for a short period in the other country.

Further the two ministers directed the TPF Working Groups to develop, by March 2022, plans of action for making substantive progress.

The bilateral trade between the countries stood at USD 80.5 billion in 2020-21. India received USD 13. 8 billion foreign direct investment from the US during 2020-21. PTI