Italian company is selling around 52 cars in India and is enjoying market leadership in the super luxury segment, priced above Rs 2 crore 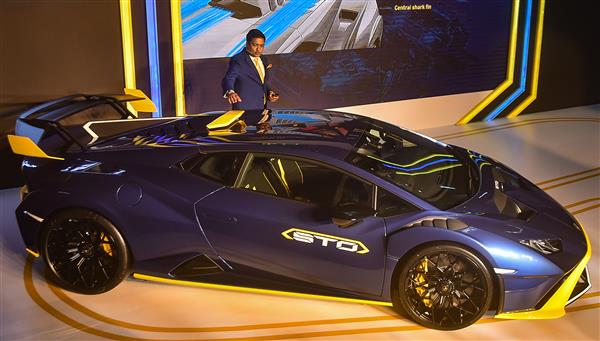 Sharad Agarwal, Head of Lamborghini India, poses during the launch of the new Lamborghini Huracan STO in Kolkata, Wednesday, on July 21, 2021. PTI

Super luxury car manufacturer Lamborghini aims at triple digit sales in India and plans to launch models concurrently in the country along with other nations, a company official said on Wednesday.

Presently, the Italian company is selling around 52 cars in India and is enjoying market leadership in the super luxury segment, priced above Rs 2 crore.

“We want sell in triple digits in India in the super luxury segment. We are selling around 52 cars in the country at the moment”, Sharad Agarwal, head, Lamborghini India told reporters here at the launch of Huracan STO super sports car.

Agarwal said that due to the pandemic, sales of super luxury cars in 2020 declined 30 per cent, adding that the company expects to reach the sales figure of 2019 level of around 270 cars in 2021, going by the trend observed in first half of the year.

The official said sales of super luxury cars peaked in 2018 with around 320 cars being sold in the category.

“Our aim is to strengthen our market share in the super luxury segment. We are already the market leader in the segment,” he added.

Agarwal said the eastern region, comprising the states of West Bengal, Bihar, Jharkhand, Odisha and the northeastern states, contributed to 14 per cent to 15 per cent of total business in India.

Most sales are generated in the south, followed by the west and north. PTI