NHPC in pact with CSIO for R&D collaboration 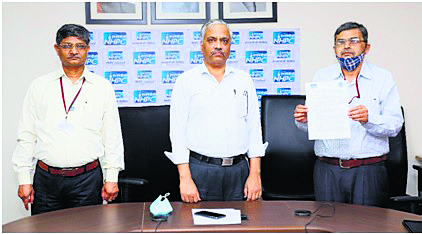 NHPC has signed a memorandum of agreement (MoA) with CSIR-CSIO, Chandigarh, for R&D collaboration. It was signed by RR Yadav, GM (In charge), R&D Division, NHPC, and Dr Surender S. Saini, senior principal scientist & Head (BDPM), CSIR-CSIO Chandigarh, in the presence of YK Chaubey, Director (Technical), NHPC, and Prof SA Ramakrishna, director, CSIR-CSIO through video conferencing. The agreement details the terms and conditions, modalities for providing research, development and consultancy services by CSIR-CSIO Chandigarh in its areas of expertise to NHPC as mutually agreed.

Kribhco, Haryana, recently organised a programme in the office of Directorate of Agriculture, Panchkula, for free distribution of preventive Covid-19 kits. The kits were distributed to the staff of the Agriculture Department in the presence of Dr Suresh Gehlot, additional director, Agriculture, and Manjeet Singh Nain, JDA (QC). Senior officials of Kribhco were also present.

Northern Railway, Ambala Division, recently operated a rake of fly ash from Bathinda to Roopnagar, thus creating a history. An entirely new stream of ‘fly ash’ traffic was started by the Ambala Division when 4,060 tonnes of hydrated fly ash was loaded in BOXN wagons. The move is seen as a win-win situation as it benefits the client in the form of reduced tariff and churns out more revenue for the Railways, apart from providing an eco-friendly way of transporting the fly ash.

HDFC Ltd has disbursed subsidy to over two lakh homebuyers under the Pradhan Mantri Awas Yojana (PMAY) Credit Linked Subsidy Scheme (CLSS). It has become the first lender in the country to do so. It has approved home loans worth Rs 47,000 crore under CLSS to homebuyers belonging to the economically weaker section, low income group and middle income groups.

NFL has recorded fertiliser sale of 23.81 lakh MT in April-August, recording a growth of 16% as compared to the previous best of 20.57 lakh MT recorded during the same period in 2019-20. On the production front too, the company has surpassed the target by producing 16.11 lakh MT of urea in the first five months of the current fiscal, higher by 13% compared to 14.26 LMT produced during the same period in 2019-20.

Nabha Power — a wholly owned subsidiary of L&T Power Development — has won two prestigious awards at the 21st National Award Ceremony for Excellence in Energy Management, hosted by CII recently. Nabha Power was adjudged as the National Energy Leader 2020 for its progressive performance for the second consecutive year in energy management. It also received the Excellent Energy Efficiency Unit award for outstanding achievements in energy efficiency. The plant received this award for the fourth consecutive year.

Malabar Gold and Diamonds has unveiled ‘Studs and Drops Festival’, offering a wide collection of captivating studs, drops and earrings across its showrooms in the country. The festival, running up to September 25, brings a vast range of studs and drops crafted in gold, diamonds and precious stones. A large collection of modern, stylish, traditional and contemporary designer jewellery has been launched.

Invesco Mutual Fund has launched Invesco India Focused 20 Equity Fund, an open-ended equity scheme. The fund seeks to generate capital appreciation by investing in up to 20 stocks with a flexibility to move across the market capitalisation range. The new fund offer will close on September 23.

HDFC Bank plans to double its banking correspondents (BCs) network in Punjab. The bank is expected to add 500 more BCs to its network by the end of this year, taking the tally to over 1,000 in the state.