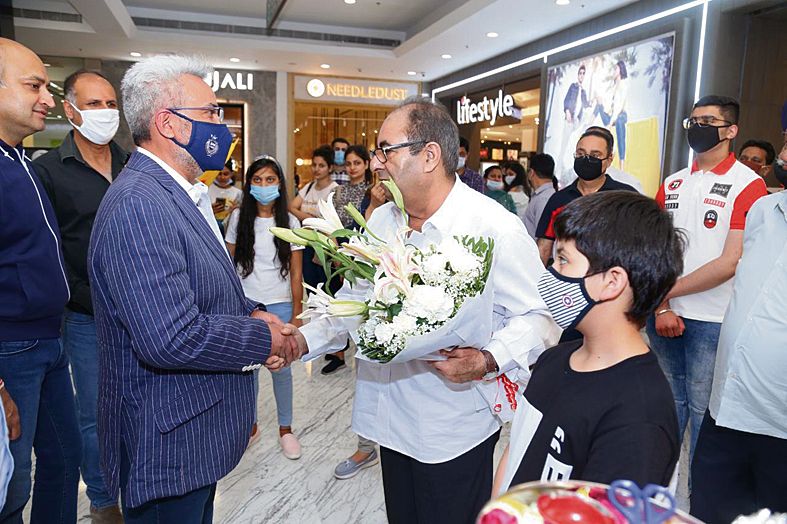 Octave — a chain of readymade apparel stores operating in India since 1991 — has opened its 173rd flagship store at Elante Mall, Chandigarh. It was inaugurated by Anil Malhotra, executive director, Nexus Malls. The brand Octave was an initiative of Balbir Kumar and started with men’s wear. Now it has entered into women’s and junior boy’s wear as well. This fall winter, the company will launch its junior girls wear.

Minister of State for Social Justice and Empowerment Rattan Lal Kataria recently informed Parliament that the government had been implementing various schemes for skill development of Scheduled Caste students. He said Rs 132 crore had been released to states through National Scheduled Castes Finance and Development Corporation for undertaking skill development programmes during the past five years.

JW Marriott, Chandigarh, has introduced executive chef Sanjeev through an expansive array of national and international cuisines with his signature style. From chef's spatula, the spirit of celebrations include American, Bengali, South and North Indian delicacies.

Adidas Originals recently opened its second store in Elante Mall. Adding a local flavour to the store, the distinctive art form of the region, Phulkari, has been incorporated to create an interesting installation of the brand's Trefoil logo that turned out to be the most Instagram'd corner at the store.

Max Bupa Health Insurance has expanded its footprint in Jammu. Customers can avail cashless hospitalisation through 11 network hospitals in Jammu and 6,000+ hospitals across the country. They will also have access to benefits like pre-authorisation of cashless claims within 30 minutes.

The Hotel Association of India (HAI), an apex body of hotels across India, has launched ‘HAI ENGAGE’— an industry-driven and hospitality-focused magazine. It will focus on raising the voice of the hospitality industry and help get recognition that the sector deserves for its role in making India a strong economic entity.

Center fresh has launched Center fresh Mints ‘Clean Breath’which marked its foray into the ‘Intense Mints’segment. The three-layer product is made using compressed mint technology with zinc lactate trapped in the central layer.

Pepsi has launched a new summer campaign featuring its brand ambassador Salman Khan. It's an extension of ‘Har Ghoont Mein Swag’ campaign which shows Khan bonding with friends over a game of carrom on a hot summer day.

Ms Kajal, a student of B.Tech (Aerospace Engineering) at GNA University, has been selected by National Aerospace Laboratory, Bengaluru. She has been selected as a project associate and working on Tejas light combat aircraft-related project.