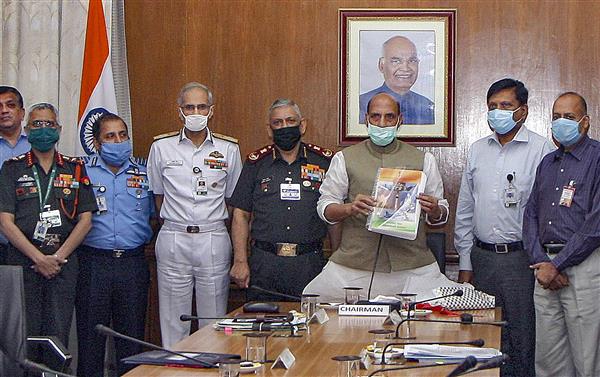 In a major move, India has done away with offset requirements for government-to-government defence deals and single-vendor contracts under a new policy unveiled on Monday for the procurement of arms and military platforms for the armed forces, officials said.

The Defence Acquisition Procedure (DAP) released by Defence Minister Rajnath Singh provides for allowing the three forces to take on lease military equipment, hardware and platforms like helicopters, simulators and transport planes as per operational requirements as it could be a cheaper option than their procurement, the officials said.

The decision to do away with the offset requirements for government-to-government deals, single-vendor contracts and acquisitions under the framework of intergovernmental pacts came days after the Comptroller and Auditor General (CAG) came down hard on the government over poor implementation of the offset policy.

Under the offset policy, the foreign defence entities, for all contracts worth more than Rs 300, were mandated to spend at least 30 per cent of the total contract value in India through procurement of components, transfer of technologies or setting up of research and development facilities.

The Offset guidelines have also been revised, wherein preference will be given to manufacture of complete defence products over components and various multipliers have been added to give incentivisation in discharge of Offsets.

The CAG had specifically mentioned about the Rs 59,000-crore Rafale deal, and said the manufacturer of the plane Dassault Aviation and weapons supplier MBDA were yet to fulfil their offset obligations of offering high technology to India. The offset component in the deal was 50 per cent.

“Offsets will not be applicable in single vendor, government-to-government and IGA (inter-government agreement) deals as per DAP 2020,” said Apurva Chandra, Director General of Acquisition in the defence ministry, adding the offset policy will remain in force contracts involving competitive bidding.

“No offset contract has led to transfer of technology,” he said indicating that it could be the reason behind the government decision.

A new procedure has been included as a new chapter in DAP and structured as an enabling provision for Services to procure essential items through Capital Budget under a simplified procedure in a time bound manner.

The categories of Buy(Indian-IDDM), Make I, Make II, Production Agency in Design & Development, OFB/DPSU and SP model will be exclusively reserved for Indian Vendors meeting the criteria of Ownership and Control by resident Indian citizens.

Another official said removing offset obligations for contracts under the three categories is likely to result in a reduction of cost of acquisitions as the defence firms used to factor in funds required to fulfil offset conditions.

The DAP, released after over a year-long consultation with concerned stakeholders, features a number of steps aimed at turning India into a global manufacturing hub of military platforms, reducing timelines for the procurement of defence equipment and allowing the purchase of essential items by the three services through capital budget under a simplified mechanism.

The first defence procurement procedure was promulgated in 2002 and since then, it has been revised periodically to provide impetus to the growing domestic industry. The DAP will come into effect from October 1.

The DAP also incorporates new chapters on information and communication technologies, post-contract management, acquisition of systems developed by the state-run defence entities like the DRDO and Defence Public Sector Undertakings (DPSUs), they said.

In what is seen as a significant move, the DAP featured measures to reduce delay in the procurement of essential items by the three services as it proposed a new enabling provision to acquire them through capital budget under a simplified procedure in a time-bound manner.

The defence minister said the DAP has also included provisions to encourage foreign direct investment (FDI) to establish manufacturing hubs both for import substitution and exports while protecting the interests of the Indian domestic industry.

“The offset guidelines have also been revised, wherein preference will be given to manufacture of complete defence products over components and various multipliers have been added to give incentivisation in discharge of offsets,” the defence minister tweeted.

He said the DAP has been aligned with the vision of the government’s ‘Aatmanirbhar Bharat’ (self-reliant India) initiative and to empower the Indian domestic industry through ‘Make in India’ projects with the ultimate aim of turning the country into a global manufacturing hub.

The policy also provides for single-stage accord of AoN (Acceptance of Necessity) in all cases up to Rs 500 crore to cut delays in approval of acquisition proposals.

“Scope of trials will be restricted to physical evaluation of core operational parameters. Other parameters may be evaluated based on vendor certification, certification by accredited laboratories, computer simulations of parameters etc,” it said. — PTI