The Reserve Bank of India on Wednesday effected a fifth successive hike in key interest rates and downgraded India’s growth projection from 7 per cent to 6.8 per cent for the current fiscal.

The 35 basis point hike in repo rate was the lowest among the five increases since May this year to tame inflation which is still expected to remain at a high threshold of 6.7 per cent. The repo rate now stands at 6.25 per cent as against 4 per cent a year ago.

The hike in repo rate raises the prospects of EMIs for home, auto and other loans rising further.

The worst is over

The worst of inflation is behind us... but that does not mean that there is any room for complacency on the battle to tame inflation. —Shaktikanta Das, RBI Governor 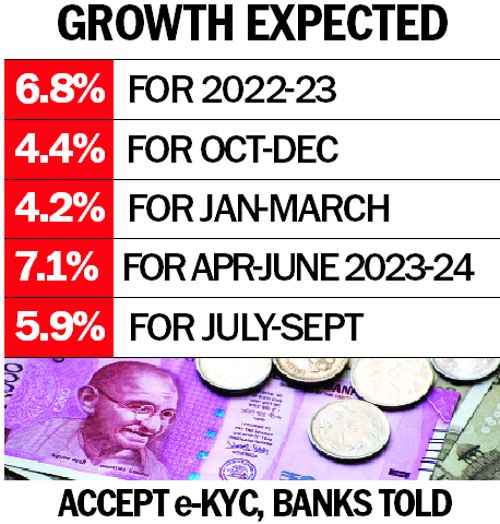 RBI Governor Shaktikanta Das said the lower quantum of hike announced in a 5:1 decision by the Monetary Policy Committee was data-driven. “The worst of inflation is behind us... but that does not mean that there is any room for complacency in the battle to tame inflation,” he said.

RBI Deputy Governor Michael Patra added that “the battle against inflation is far from over and so is our neutral stance.... But the good thing is that we’ve lowered the size of the policy rate change. That is the most important thing.”

“After three continuous 50 bps increases, we’ve now moderated it to 35 bps… that tells you of a shift in the wind. But the moderation in inflation is very uneven, so we must first bring inflation firmly under the tolerance band,” he added. Though India’s GDP growth is now expected to be 20 basis points lower at 6.8 per cent, the RBI chief pointed to the resilience in the economy which is doing well amidst sluggish global growth.

The RBI chief also parried anxieties on the falling value of the rupee and a widening current account deficit (CAD). “The story of the rupee is one of resilience and stability, and we remain committed to act to prevent excessive volatility of our exchange rate,” he said. The CAD is eminently manageable, he said while pointing to forex reserves of $561 billion and comfortable external debt ratios.