Strong macroeconomic data and a sustained recovery in the rupee on the back of foreign fund inflows also buoyed sentiments, say traders 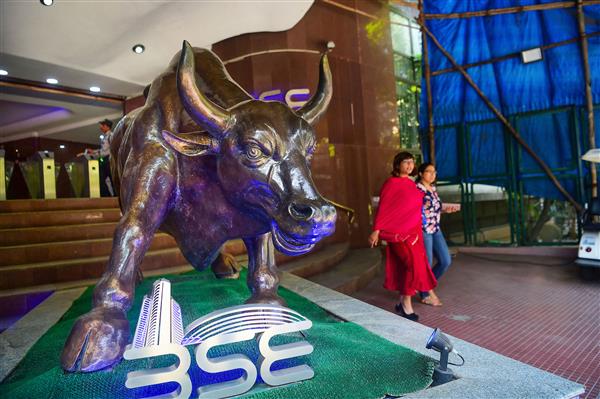 Equity indices darted up for the fourth straight session on Monday to close at over three-month highs, boosted by robust buying in market heavyweight Reliance Industries and auto stocks amid firm global trends.

Strong macroeconomic data and a sustained recovery in the rupee on the back of foreign fund inflows also buoyed sentiments, traders said.

Mahindra & Mahindra topped the Sensex gainers’ chart, soaring 6.15 per cent after the auto major posted a 33 per cent increase in domestic passenger vehicles sales in the previous month.

Reliance Industries and Bharti Airtel climbed as much as 2.64 per cent following the culmination of India’s biggest ever auction of airwaves, with spectrum worth Rs 1,50,173 crore being sold.

Maruti Suzuki, Kotak Mahindra Bank, NTPC, PowerGrid and UltraTech Cement were among the other prominent gainers.

However, Sun Pharma, Hindustan Unilever, IndusInd Bank, Nestle India, Asian Paints and TCS closed with losses of up to 2.65 per cent.

On the macroeconomic front, GST collections rose 28 per cent to touch the second-highest level of Rs 1.49 lakh crore in July on the back of economic recovery.

In the broader market, the BSE midcap gauge jumped 1.51 per cent and the smallcap index spurted 1.47 per cent.

Bourses in Europe were trading in the green during mid-session deals. The US markets had ended on a higher note on Friday.

The rupee appreciated by 22 paise to close at 79.02 (provisional) against the US dollar on Monday amid risk-on sentiments, decline in crude oil prices and weak American currency overseas.

Foreign institutional investors remained net buyers in the capital markets as they bought shares worth Rs 1,046.32 crore on Friday, as per exchange data. PTI