The Finance Ministry needs to take a closer look at the way in which small businesses operate and provide succour accordingly rather than implement a mechanical policy of refreshing bank loans. It is time for the government to implement measures to provide short-term support in a bid to ensure that recovery takes place sooner rather than later. 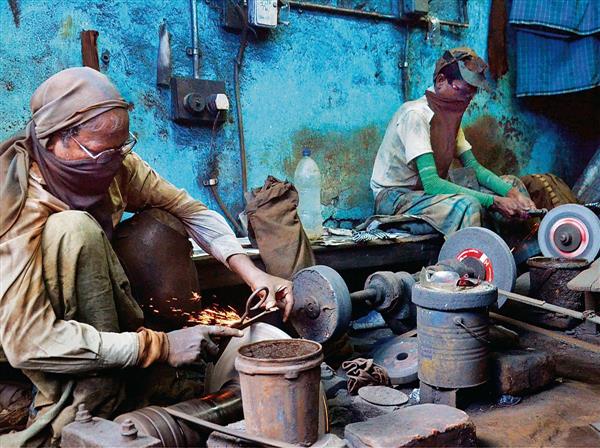 Tough times: The recent economic package has failed to lift the spirits of the MSME sector.

As India tries to bring its economy back to life, the pandemic continues to rage with unrelenting ferocity. The process of unlocking has been far from smooth, with genuine fears over restarting work in many sectors. Even so, there are hints of light at the end of the proverbial tunnel. A few green shoots of recovery are visible, though much more support is needed to convert them into a full-fledged economic revival. The biggest plus point is the agricultural sector, where record rabi output and procurement is expected to spur demand in the rural belts of the country. Agriculture still accounts for about 16 per cent of the GDP while providing for 60 per cent of employment. So, agricultural growth, coupled with rising rural demand, is likely to be the basis for a recovery process during the rest of the current fiscal.

The rabi foodgrain output for the year is estimated at a record level of 149 million tonnes compared to 139 million tonnes last year. In addition, plentiful rain in June and forecast of a normal monsoon have boosted hopes of an equally good kharif crop. Area under sowing has already increased substantially. Tractor sales have risen by 4 per cent compared to last year, while even two-wheeler and passenger car sales are surging in rural areas in contrast to the urban slump. These signs of a pick-up in rural demand hint at relief in the coming months for the industry which is hunting for markets.

Another key sign of recovery is rising GST (Goods and Services Tax) collections and e-way bills that are inching back to pre-Covid levels. This is a critical factor for both the Central and state governments looking for revenues to fill exchequers facing depletion ever since the lockdown began in March end. GST collections for June have rebounded to Rs 90,917 crore from a record low of Rs 32,394 crore in April. It may still be 9 per cent lower than last year but indicates business is getting back on track. Electronic way bills reflecting goods movement have also risen significantly in June, though these are not yet at January levels.

Trade data, on the other hand, presents a mixed picture with the country likely to have its first monthly trade surplus in June after 18 years. This is not for all the right reasons. It reflects languishing imports due to slowdown in economic activity as well as lower world oil prices. On the bright side, exports are now about 90 per cent of pre-Covid levels. But bringing exports back to pre-pandemic levels is not good enough right now. What is needed is a positive drive to push exports as well as to finalise several free trade agreements that have taken years in negotiations like the one with the European Union.

Other positive signs hinting at economic revival include rising power and fuel consumption. The former is only 6 per cent lower than normal while oil products consumption is back to nearly 90 per cent of pre-Covid levels. E-commerce is also thriving and major players say sales are back to 90 per cent of normal times. On the other hand, physical retail is still facing a 60 per cent slump in sales while FMCG companies are finding the demand is largely for food and hygiene products. Similarly, hospitality and aviation industries are in a tailspin.

Despite all these glimmers of hope, there is no doubt the economy will contract rather than grow in the 2020-21 fiscal. Even the Finance Ministry is looking at a shrinkage of 4.5 per cent, in line with estimates by the International Monetary Fund. At the same time, there is a surprising degree of optimism for the next fiscal among various institutions with the IMF expecting growth to touch six per cent while Fitch Ratings has even pegged it at 9 per cent.

There are also varying predictions about whether the recovery will be V- shaped, meaning a rapid revival, U-shaped, implying stagnation before growth, or W-shaped, a slump after an initial period of growth. At this stage, a U-shaped recovery looks most likely, given the fact that the manufacturing sector is still in the doldrums. Despite unemployment data now pegged at only slightly higher than the pre-lockdown levels, merely 30 per cent of the industry is reported to have touched even 70 per cent capacity. Clearly, the road to growth will be slow and painful over the next two years.

As for converting these green shoots into sustained recovery, there are a few things the government needs to do immediately. First, it needs to provide greater comfort to small business enterprises that have been hit hard by the pandemic. The recent package given to the micro, small and medium enterprises (MSME) has simply failed to provide much relief to these companies, most of whom have not even taken loans and thus fail to qualify for the concessions. The Finance Ministry needs to take a closer look at the way in which small businesses operate and provide succour accordingly rather than implement a mechanical policy of refreshing bank loans. Unless the MSME sector is rescued in a genuine way, recovery next year will be a pale shadow of expectations.

And second, it needs to provide substantial funds through direct benefit transfer to the poorest of the poor. The decision to extend free foodgrains right up to Diwali is welcome but must go along with cash transfers to support those who have lost livelihoods owing to the lockdown. This will bring about the much-needed demand stimulus for the economy. The same suggestion has been made by many economists and institutions over the past two months but little heed has been paid to these pleas. Instead, reforms having a medium or long-term impact have been announced for various sectors. In contrast, direct fund transfers will have an immediate beneficial effect for those most disadvantaged.

It is time for the government to implement measures to provide short-term support measures in a bid to ensure that recovery takes place sooner rather than later. These measures, both for small enterprises and those at the bottom of the pyramid, must be taken rapidly to be truly meaningful.