Today is a big day for us, a new 'Day Zero': Zomato CEO

Zomato made a stellar debut on Dalal Street 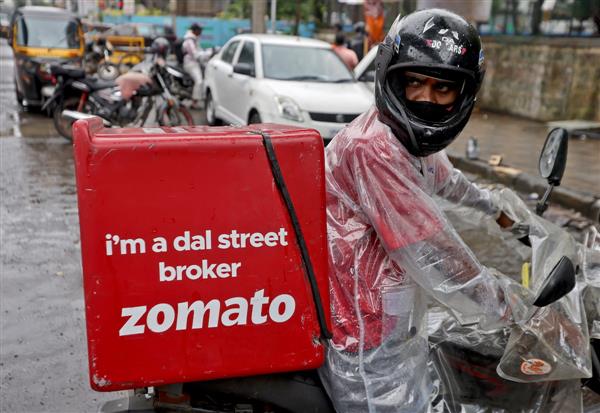 A delivery worker of Zomato prepares to leave to pick up an order from a restaurant in Mumbai. REUTERS

As Zomato made a stellar debut on Dalal Street, its Founder and CEO Deepinder Goyal said this was a big day for the company -- A new Day Zero.

Shares of the firm listed at nearly 53 per cent premium in its debut trade against its issue price of Rs 76. With this rally, its market valuation went past the Rs 1-lakh-crore mark on BSE.

Earlier in the day, he also said in a blog post, "Today is a big day for us. A new Day Zero. But we couldn't have gotten here without the incredible efforts of India's entire internet ecosystem." In the blog titled, "Letter from Deepi”, he said he was a firm believer in India, and where the country will be in the future, adding that “India is a tough market to operate in, but if you are building to succeed in India, you are already an exception”.

He believes Zomato and Swiggy are two of the best food delivery apps in the world today. “We have a long way to go before we can call ourselves world-class by our customers' standards, but we are determined to get there." Zomato's over 10 -year journey has not always been smooth. It has lived through many ups and downs – something not every company has the privilege of living long enough to do, he added.

"...We have found ourselves managing times of crisis on different occasions in much the same way – impatiently staying focused on the long term, executing relentlessly, and committing ourselves to doing the very best we can do today," Goyal said.

Even in its hardest times, the company has had half of its tech/engineering teamwork on long-term initiatives, he added.

"We are going to relentlessly focus on 10 years out and beyond, and are not going to alter our course for short term profits at the cost of long term success of the company," Goyal said.

The tremendous response to the company's IPO, "gives us the confidence that the world is full of investors who appreciate the magnitude of investments we are making, and take a long term view of our business," he added.

They say it takes a village to raise a child, and Zomato is no exception, he said, noting that hundreds of people have selflessly played a part in making Zomato what it is today.

He also thanked the investors who have stood by the company through thick and thin.

"Jio's prolific growth has set all of us up for unprecedented scale. Flipkart, Amazon, Ola, Uber, Paytm – have also over the years, collectively laid the railroads that are enabling companies like ours to build the India of the future," Goyal said.

Zomato stands proudly and humbly on the shoulders of giants, and thanks to everyone for giving it, and so many other startups, the opportunity to look ahead into the future, he added.

"I don't know whether we will succeed or fail – we will surely, like always, give it our best. But I hope that the fact that we are here, inspires millions of Indians to dream bigger than we ever have, and build something way more incredible than what we can dream of," Goyal said.

In a tweet, Goyal said: "A lot of people are calling this a 'historical moment'.  It is not. History is always made in hindsight. Never in the present. Back to work." Goyal also retweeted a tweet of Info Edge (India) founder Sanjeev Bikhchandani, "Congratulations and very well done team Zomato and Deepinder. Great things take time to build. Thank you for making us look like smart investors." PTI