Growth is projected to rebound to 5.2 per cent in 2021, -0.2 percentage points below its June projection 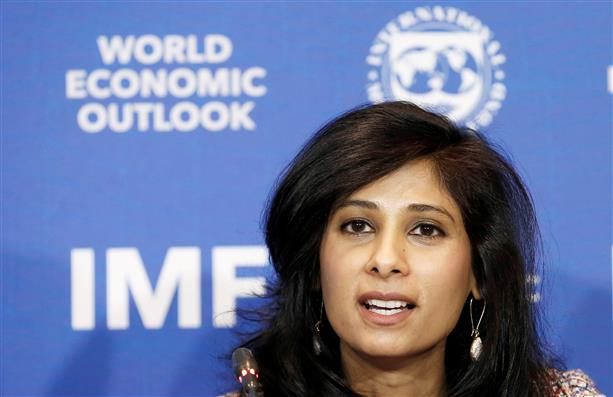 The International Monetary Fund on Tuesday predicted a deep global recession this year and the world growth to be - 4.4 per cent, asserting that the global economic crisis is far from over mainly due to the impact of the coronavirus pandemic.

In its latest World Economic Outlook report, the International Monetary Fund also said the swift recovery in China has surprised on the upside while the global economy’s long ascent back to pre-pandemic levels of activity remains prone to setbacks.

“This crisis is however far from over. In our latest World Economic Outlook, we continue to project a deep recession in 2020. Global growth is projected to be -4.4 per cent, an upward revision of 0.8 percentage points compared to our June update,” Gita Gopinath, the Chief Economist of the IMF, said.

This upgrade owes to somewhat less dire outcomes in the second quarter, as well as signs of a stronger recovery in the third quarter, offset partly by downgrades in some emerging and developing economies.

According to the report, in 2021, growth is projected to rebound to 5.2 per cent, -0.2 percentage points below its June projection.

Noting that the COVID-19 pandemic continues to spread with over one million lives tragically lost so far, the Indian-American economist said living with the novel coronavirus has been a challenge like no other.

However, she said the world is adapting as a result of eased lockdowns and the rapid deployment of policy support at an unprecedented scale by central banks and governments around the world.

“The global economy is coming back from the depths of its collapse in the first half of this year,” she said.

“Employment has partially rebounded after having plummeted during the peak of the crisis. This crisis is however far from over. Employment remains well below pre-pandemic levels and the labour market has become more polarised with low-income workers, youth, and women being harder hit,” she added.

She further said the poor are getting poorer with close to 90 million people expected to fall into extreme deprivation this year.

“The ascent out of this calamity is likely to be long, uneven, and highly uncertain. It is essential that fiscal and monetary policy support are not prematurely withdrawn, as best possible,” Gopinath said.

Gopinath said that except for China, where output is expected to exceed 2019 levels this year, output in both advanced economies and emerging market and developing economies is projected to remain below 2019 levels even next year.

The divergence in income prospects between advanced economies and emerging and developing economies, excluding China, triggered by this pandemic is projected to worsen, she said.

Gopinath said for emerging market and developing countries, except for China, IMF has a downgrade with growth projected to be - 5.7 per cent in 2020 and then a recovery to 5 per cent in 2021.

With this, the cumulative growth in per capita income for emerging-market and developing economies, excluding China, over 2020-21 is projected to be lower than that for advanced economies, she said.

Gopinath said that the considerable global fiscal support of close to USD 12 trillion and the extensive rate cuts, liquidity injections, and asset purchases by central banks helped save lives and livelihoods and prevented a financial catastrophe.

“There is still much that needs to be done to ensure a sustained recovery,” she said.

First, greater international collaboration is needed to end this health crisis. Second, to the extent possible, policies must aggressively focus on limiting persistent economic damage from this crisis.

Gopinath said over time, as the recovery strengthens, policies should shift to facilitating the reallocation of workers from sectors likely to shrink on a long-term basis (travel) to growing sectors (e-commerce).

Emerging market and developing economies are having to manage this crisis with fewer resources, as many are constrained by elevated debt and higher borrowing costs, she said.

Lastly, Gopinath said the policies should be designed with an eye toward placing economies on paths of stronger, equitable, and sustainable growth.

The global easing of monetary policy while essential for the recovery should be complemented with measures to prevent the build-up of financial risks over the medium term, and central bank independence should be safeguarded at all costs, she said. PTI