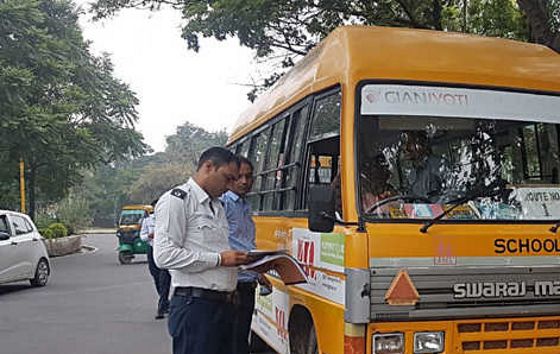 The local traffic police today challaned 10 school buses, which were found without a lady attendant and CCTV cameras.

Divulging details, DSP (Traffic) Mahesh Saini said a surprise check of school buses was conducted and 10 of the total 31 buses checked were found violating the norms.

The DSP said while five of the school buses challaned did not have a lady attendant while the other five either did not have CCTV cameras installed or the devices were non-functional.

Saini said the unannounced checking of school buses had revealed that school administrators were not operating their buses as per the norms.

The DSP said the bus drivers and lady attendants were briefed about the guidelines of the Safe School Transport Policy and schoolchildren were also informed about the traffic rules.

The DSP said road safety had become one of the most-important issues today as the number of deaths in mishaps was steadily increasing. He said it was imperative that parents do not allow their children to drive at an early age.