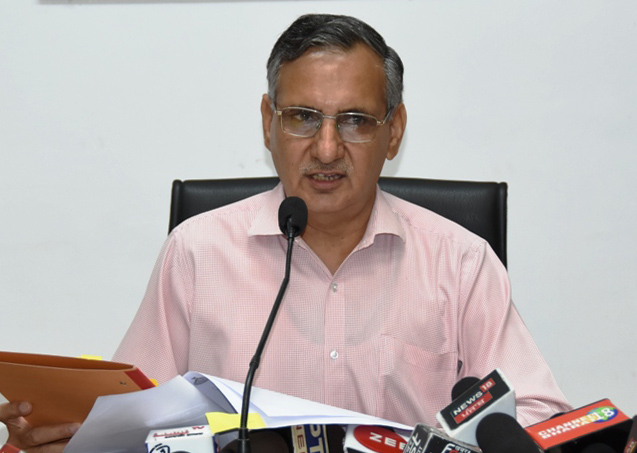 DC Mahavir Kaushik addresses the media at the Mini-Secretariat in Panchkula on Saturday. TRIBUNE PHOTO

As many as 143 villages out of 171 in Panchkula district have been declared lal dora-free and property cards/gift deeds have been distributed among 22,687 people to give them the ownership rights of their land.

Divulging details, Deputy Commissioner Mahavir Kaushik said under the Swamitva Scheme the main objective of the state government was to make the villages free of lal dora and give the ownership rights to the people of their property. He said getting the ownership of the land would not only end the mutual disputes related to land in the village, but the land owners would be able to sell their land easily and take loan on it.

On the Old Age Honour Allowance Scheme, Mahavir Kaushik said now the beneficiaries would not have to make rounds of government offices and would get the benefit while sitting at home. He said presently 25,298 beneficiaries were availing the benefits under this scheme.

“The beneficiaries are no longer required to apply under the scheme. After attaining the age of 60 as per the Parivar Pehchan Patra, the employees from the office of the District Social Welfare Officer will go to the beneficiary’s house. After receiving the necessary documents from the beneficiary and taking the consent form, an old age honour allowance of Rs 2,500 will start depositing in the beneficiary’s account,”Mahavir Kaushik said. He said under this new initiative of the state government introduced since April 1, 2022, 64 senior citizens are taking advantage of this scheme in the district.

Mahavir Kaushik said 17 Mukhyamantri Antyodaya Parivar Utthan Melas had been organised in the district in three phases, in which 2,076 beneficiaries participated. He said in these fairs, 1,058 applications had been approved under various schemes of the departments. Loans were sanctioned to 374 beneficiaries through banks for setting up their own businesses. He said out of the total beneficiaries, 293 had got the loans. Apart from this, 154 beneficiaries have been provided computer and other training in these fairs.

Commenting on the vaccination drive, Kaushik said only by adopting Covid appropriate behaviour and vaccination, the Covid epidemic can be completely controlled. He said 82.6 per cent of the first dose and 47.4 per cent of the second dose had been given in the age group of 12-14 years.

Similarly, 88.4 per cent of the first dose and 61.2 per cent of the second dose were administered in the age group of 15-17 years. He appealed to the parents to get their children administered the dose of vaccine without any fear. He said private schools should also organise camps in collaboration with the Health Department and get the students vaccinated. He said out of 1.5 lakh people, who are eligible to get the booster doze, 50,552 people have received the jab till now. Apart from this,Covid testing was also going on and about 2,000 samples were being taken for testing daily in the district.