Coming from a humble background, 18-year-old local athlete Simran Kaur has been selected in the National Centre of Excellence (NCOE), Sports Authority of India (SAI), Patiala, to pursue her dream of becoming a star sprinter. She is perhaps the first 100m and 200m specialist to get the NCOE after clearing trials conducted by the SAI.

Simran, whose father is a Home Guards volunteer in the Chandigarh Police, is the eldest among three children, all achievers. Her 14-year-old younger sister is a state champion in shot put and youngest brother is a long jump champ. Simran has represented the city in nine nationals and has won several accolades.

‘Getting admission to NCOE is a big thing’

There was no plan of becoming a professional athlete. My father forced me to join the Sector 7 sports complex for some physical activity. I didn’t look back since then. Getting admission to the NCOE is a big thing. — Simran Kaur

“There was no plan of becoming a professional athlete. My father forced me to join the Sector 7 sports complex for some physical activity. I didn’t look back since then. Getting admission to the NCOE is a big thing. It will allow me to practice with top Indian sprinters amid proper and professional environment,” said Simran. 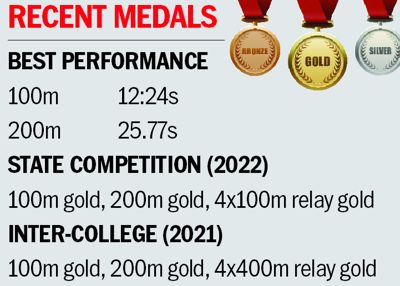 However, this success doesn’t come overnight. Simran’s father, who is the sole bread winner of the family, had to give up on many things to ensure her elder daughter gets whatever needed for becoming a successful person.

“He (her father Gurpeet Singh) had done a lot for me. I remember the time when I was asked to take a proper and planned diet, which my father used to somehow manage for me. However, I am lucky to get help from Birinder Singh Sidhu, who now helps me to get diet and kit, and also my coach Maninder Singh, who always motivated me to overcome such hurdles,” said Simran.

“It’s a great opportunity for me to pursue my career. I will be joining the NCOE in the next few days,” she said.