Work at Khuda Ali Sher to be completed this month 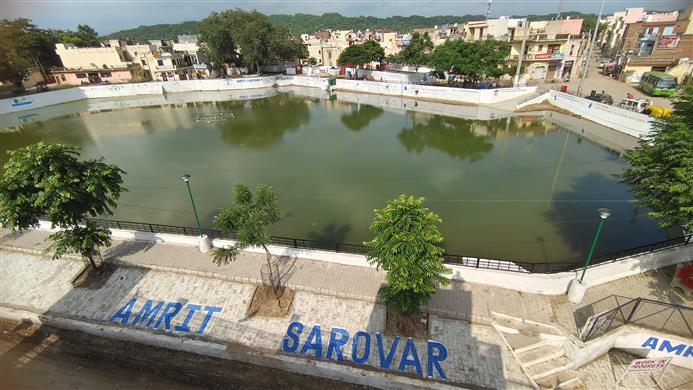 Two more ponds are set to be converted into “sarovars” soon at the villages of Khuda Ali Sher and Dadu Majra.

According to the municipal corporation, work at Khuda Ali Sher village is in progress and the “sarovar” will be completed by December-end. The tender for the rejuvenation of the Dadu Majra pond will be floated this month and work completed by April 30 next year.

Fountains, lighting and adequate seating arrangements will be made at these ponds.

Earlier, two ponds at Kaimbwala and Sarangpur villages were converted into “sarovars” under the Jal Shakti Mission Abhiyan of the Centre. The rejuvenation of ponds in the villages of Khuda Jassu, Dhanas, Maloya and Kaimbwala will be looked after by the engineering wing of the Chandigarh Administration.

The ponds are being rejuvenated to promote environment and water conservation. Prime Minister Narendra Modi had launched the Amrit Sarovar Mission as part of the Azadi Ka Amrit Mahotsav celebrations to conserve water and set August 15, 2023, as the deadline. The mission is aimed at developing and rejuvenating 75 water bodies in each district of India.

Officials in the MC said these ponds had become polluted due to neglect. Waste from various sources flowed into these ponds.

“Waste water of households flows into the ponds. The MC should take care of these ponds even after rejuvenation. It should have a proper maintenance plan for the future. Otherwise, these water bodies will again become polluted,” said Harjinder Singh, chairman of an RWA of Dadu Majra.

The tender for the rejuvenation of the Dadu Majra pond will be floated this month and work completed by April 30 next year. Fountains, lighting and adequate seating arrangements will be made at the two ponds.