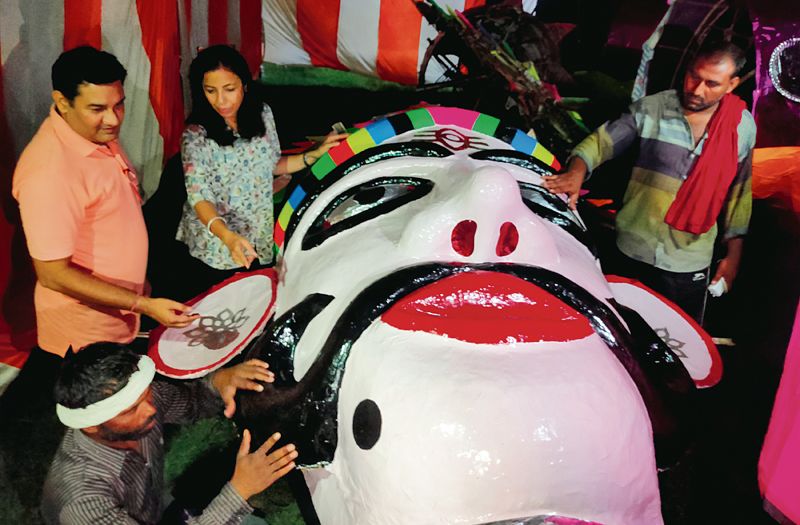 Artisans add the finishing touches to an effigy of Ravana in Sector 28, Chandigarh, on Friday. Tribune Photo: Pradeep Tewari

After enforcing a ban on fireworks for two years, the UT Administration today allowed use of green crackers this Dasehra, Diwali and Gurpurb.

The decision was taken at a meeting chaired by UT Administrator Banwarilal Purohit ahead of the festival season. City residents will now be able to burst green crackers within a stipulated time frame.

Use of green crackers will be allowed on Diwali from 8 pm to 10 pm, and Dasehra (during burning of effigies) and Gurpurb from 4 am to 5 am and 9 pm to 10 pm.

The Supreme Court vide its orders dated October 23, 2018, had allowed sale of green crackers with directions that on Diwali or on any other festival such as Gurpurb, etc. fireworks would be held from 8 pm to 10 pm only.

We welcome the decision. This is a step in the right direction and will bring back festival spirit in the city. People can celebrate the festival in traditional manner. —Charanjiv Singh, President, Chandigarh Beopar Mandal

Further, the Principal Bench of the National Green Tribunal (NGT), New Delhi, vide its orders dated December 1, 2020, allowed restricted use of crackers in cities/towns where air quality was moderate or poor. It also allowed use of only green crackers and that too for not more than two hours.

As per a report on Air Quality Index received from the Chandigarh Pollution Control Committee, the air quality during the Diwali month in 2020 and 2021 was found to be moderate/satisfactory, therefore the UT Administration has allowed the use of green crackers in the city.

Green crackers have been developed by the National Environmental and Engineering Research Institute (NEERI), a subsidiary of the Council of Scientific and Industrial Research (CSIR).

Owing to the pandemic, the administration had imposed a complete ban on sale and bursting of firecrackers as a containment measure to prevent the risk of spread of the virus in 2020 and 2021.

With the festival season around the corner, the Chandigarh Cracker Dealers Association had recently urged the administration to allow green crackers this year.

The association had stated neighbouring states of Punjab, Haryana and Himachal Pradesh had already allowed crackers as per the directions of the NGT and Supreme Court.

Association general secretary Chirag Aggarwal thanked the administration and city BJP president Arun Sood for taking up the matter. He said it was a source of livelihood for many small and medium traders who had been in the business for generations.

As green crackers will cost nearly 30% more than the traditional ones, the association will ask traders to keep margins thin to let people celebrate the festival without burning a hole in their pocket.

The Sanatan Dharam Sabha Dasehra Committee, Sector 46, will hold a laser show on Dasehra. Jitender Bhatia, patron, said they would use sound to mimic crackers as the UT was late in taking a call. Effigies would be burnt symbolically.