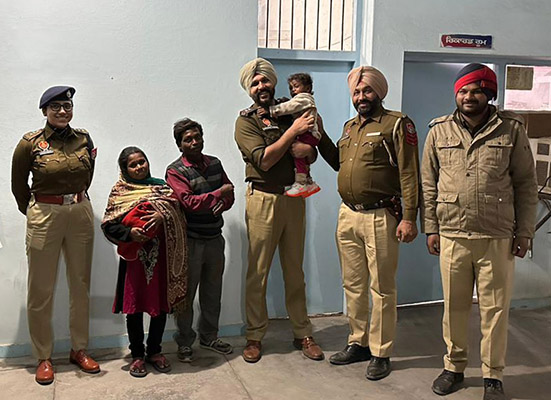 Police officials with the child and his parents at Dera Bassi.

The two-year-old son of a Dera Bassi couple, who had gone missing from a nearby park on November 21, has been rescued by the police.

The suspect, Rajesh Paswan, a resident of Bareilly, Uttar Pradesh, had allegedly taken away Chandan, one of the two siblings playing in the park in the afternoon. The police said the child, son of Guddu, was rescued and the suspect arrested near Sohana. The child was handed over to the family, a migrant labour couple.

A case under Section 365 of the IPC had been registered at the Dera Bassi police station on November 26. The suspect has been remanded in three-day police custody.

ASP Darpan Ahluwalia said: “After the child’s parents approached the police, an FIR was registered the same day i.e. on November 26 afternoon and the suspect was arrested on November 27 evening.” The police were investigating as to how the accused zeroed in on the family and the child, added the ASP. The police said the siblings — Chandni, a girl, and Chandan — of the couple, living under the Dera Bassi flyover, had gone to play in the park. The girl retuned two hours later, but the boy could not be found. The family searched for him, but in vain.

After checking the CCTV footage near the park, it was revealed the child was taken away by an unidentified suspect.

The man was caught with the child near Sohana while allegedly taking the child to Uttar Pradesh. The suspect was married seven years ago and had no offspring. — TNS

The suspect did not have an offspring and thus decided to steal the child. No ransom call was made to the parents. — Jaskanwal Singh, Zirakpur SHO