23 EV charging stations all powered up, to open soon in Chandigarh : The Tribune India

92 vehicles can be charged simultaneously at 9 sites in city 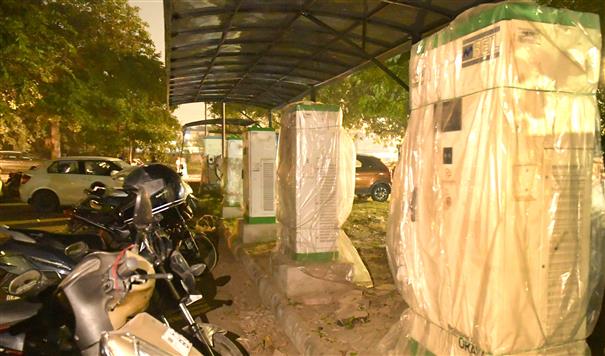 Around 80% of the battery can be charged within 30 minutes at the fast-charging stations in Chandigarh. Photo: Pradeep Tewari

In a relief for those having electric vehicles, users will soon be able to charge their vehicles at 23 charging stations at nine locations across the city. These stations will have a total of 92 charging guns, through which an equal number of vehicles can be charged simultaneously.

As many as 23 fast-charging stations, of the 37 sanctioned under the Faster Adoption and Manufacturing of Hybrid and Electric Vehicles (FAME-II) India scheme, have been installed and energised and will be made operational shortly, says Debendra Dalai, Chief Executive Officer, Chandigarh Renewable Energy and Science & Technology Promotion Society (CREST), the nodal agency for the implementation of the Electric Vehicle (EV) Policy in the city.

The work to make the charging stations operational had been awarded to Rajasthan Electronics & Instruments Limited (REIL), a public sector undertaking. “Commissioning of all 23 charging stations has been done. We had a dialogue with REIL officials on the finalisation of lease rent,” he says, adding the lease rent will be finalised at the earliest and all 23 stations will be made operational soon after.

To cover the entire city, work on installation of 44 more charging stations under the ‘Chandigarh developer mode’ has also been allotted to firms.

As many as 328 electric vehicles can be charged simultaneously across the city on these slow, moderate and fast chargers. Battery-swapping stations will also be set up along with the charging stations at 26 locations in the first phase, he says.

Vehicles purchased by local residents can also be charged at home through domestic electricity connections.

For convenience of consumers, CREST will soon develop a mobile application to provide real-time information on charging stations such as updates on time slot, type of station, load, location and tariff.

The UT Administration had notified the EV Policy on September 20 and fixed the charging tariff at Rs 8 per unit for slow and moderate charging, Rs 10 per unit for fast charging and Rs 11 per unit for battery swapping.

To a question raised in the Rajya Sabha yesterday, the Ministry of Road Transport and Highways replied six public charging stations had been made operational in Chandigarh. The minister further replied as many as 4,161 electric vehicles, including 1,004 two-wheelers, 2,683 three-wheelers, 391 cars, have been registered in the city in the past five years.

37 charging stations coming up at 15 locations in city

How much will it cost

Where to juice up your electric vehicle