24 days on, Sidhu back as Mohali Mayor, slams AAP : The Tribune India

24 days on, Sidhu back as Mohali Mayor, slams AAP 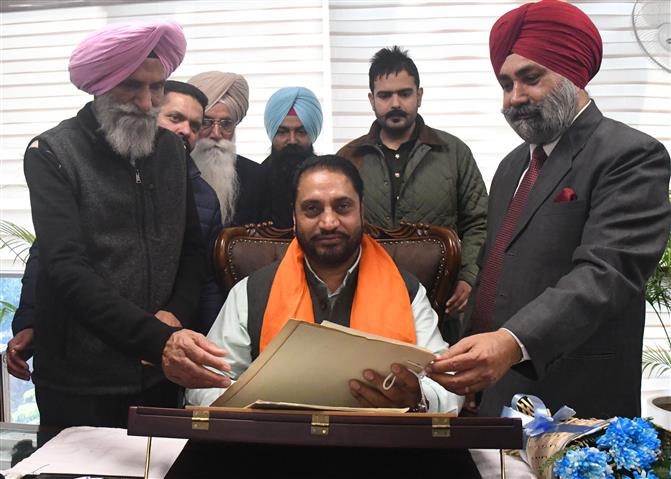 Twentyfour days after the Local Bodies Department cancelled the membership of Amarjit Singh Sidhu as councillor, the BJP leader was back at the seat of Mayor in the Mohali Municipal Corporation office today.

Armed with the High Court stay over the cancellation of his membership in the “conflict of interest” case, Sidhu, along with his elder brother and former Health Minister Balbir Singh Sidhu, attacked the AAP government and termed the move as “dhakkeshahi” at the behest Mohali MLA, though he desisted from naming him.

Sidhu claimed he had presented his defence in front of the Secretary, Local Government, and the minister but they still cancelled his membership when he was out of the country on leave. “The High Court gave me relief but the state government, led by AAP, betrayed the mandate of people. We cooperated with Mayor Kulwant Singh for a full term,” he said.

The Punjab and Haryana High Court has fixed April 20 as the next date of hearing on this matter.

On December 30, the Local Government Department had terminated the membership of Sidhu in a “conflict of interest” case over the allotment of tenders for development works.

On August 11, six AAP councillors and two former councillors had written to the department. They had stated that Sidhu, as Mayor and F&CC chief, “is allotting work to Amritpreet Cooperative L/C Society Limited, in which he himself is a member and beneficiary…while exercising the functions of a Mayor, he is, in fact, allotting public works at the cost of the public exchequer to his own society in order to fraudulently mint money from the Municipal Corporation”.

On September 15, Sidhu was issued a show-cause notice and given 15 day to reply to the charges. Sidhu had challenged the notice in the High Court, but withdrew the plea later. He was given an opportunity for a hearing by the department in the case on December 20.