Shooter behind it: Family | Gang war not ruled out: Cops 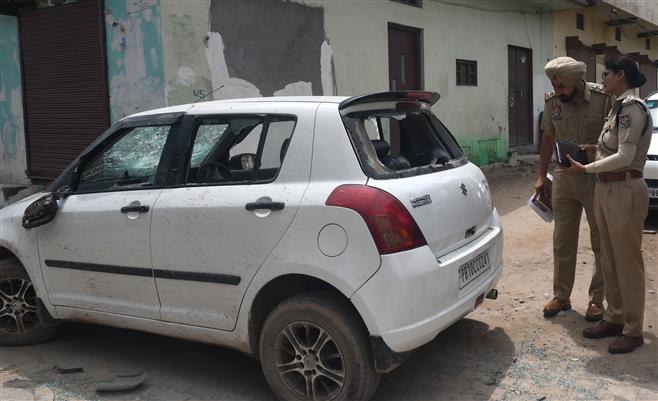 Police officials inspect a car at the scene of the attack at Guru Nanak Colony in Kharar; and Bunty Sharma, victim. Vicky

A Badh Majra youth was beaten to death with rods in a bloody clash between two groups at nearby Guru Nanak Colony in Kharar around 11 pm on Tuesday. An injured Bunty Sharma, 26, was taken to the PGI where he died.

The victim’s mother claimed it was the handiwork of a shooter, Kaalu, currently lodged in jail. The police have not ruled out gang war angle in the case.

Victim, kin have criminal past

Bunty, who too had previously spent time in jail, had received a phone call from a friend saying he was being assaulted by a group of youths after which he left his home.

Eyewitnesses said a group of around 15 youths fatally assaulted him with rods, swords and vandalised his vehicle at Guru Nanak Colony before fleeing the scene.

A car with the Punjab registration number was found vandalised near the scene with rods, bricks and swords.

A clash took place between two groups in which one person died on Tuesday night. The police have procured CCTV footage of the area and started investigation. —Rupinderdeep Kaur Sohi, DSP Kharar-1

The family of the deceased alleged they had lodged a complaint with the Balongi police station about threat to his life. His mother said she feared for the lives of her other two sons, also lodged in jail, and husband.

The family alleged while the attack took place late last night, the police arrived at the scene early this morning.

All four male members of to death in Mohali clash the family have had a brush with the law at some point in time. The siblings were involved in the last year's Madanpura firing incident wherein four suspects rammed their SUV into a bike and fired a shot at Balongi resident Rohit

Cops said the family used to give shelter to Bishnoi gang member Rajinder, alias Joker, a native of Hisar and the prime suspect in the Madanpura firing case of November 11. He was arrested on December 1, 2021. Joker was earlier involved in a firing incident at Balongi in 2017 in which a financier was injured.

DSP Kharar-1 Rupinderdeep Kaur Sohi said: "A clash took place between two groups in which one person died last night. The police have scoured the CCTV footage of the area. We have started the investigation."

Not ruling out gang war angle, Balongi SHO Parivinkal Grewal said: "The deceased was earlier booked in a case and one of his associates, Joker, was linked to the Lawrence Bishnoi gang."