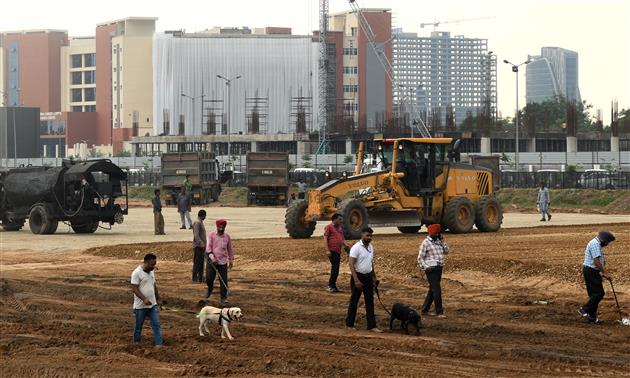 A dog squad at the helipad site near Homi Bhabha Cancer Hospital and Research Centre in Mullanpur on Monday. Tribune photo: Vicky

Ahead of the inauguration of the Homi Bhabha Cancer Hospital and Research Centre in Mullanpur by Prime Minister Narendra Modi on August 24, three makeshift helipads have come up in the vicinity where the dry run of helicopter landing was undertaken today.

Depending upon the weather conditions, the helipads may be used by the Prime Minister for arrival at or departure from the venue. Two days ahead of the visit, the entire stretch of the road from Dhanas up to the Air Force Station has been secured by security personnel.

The preparation is in final stages with review meetings going on. Dry runs are being carried out to ensure foolproof security. — Amit Talwar, Mohali DC

The dog squad and anti-sabotage teams remained busy scanning the area the entire day. Security personnel were also seen deployed at the rooftop of houses in Mullanpur for a bird’s-eye view. The pandal for the event is being given the finishing touches.

Officials said the event will be of one-hour duration with the inauguration scheduled around 2 pm. The inauguration ceremony will be a brief affair of 15 minutes inside the complex, followed by the public event. A gathering of around 500 to 1,000 is expected at the venue.