3 nailed for painter’s murder in Mohali, 5 still at large : The Tribune India

3 nailed for painter’s murder in Mohali, 5 still at large 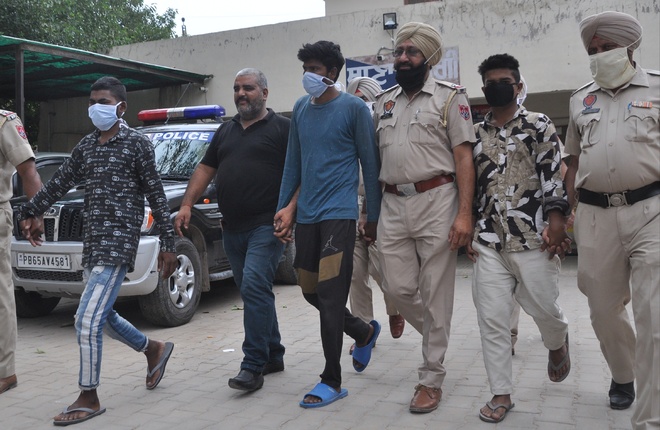 Three days after a 35-year-old painter was murdered by unidentified persons over a petty issue at Badmajra village near Balongi here, the police today arrested three suspects, while five suspects are still at large.

The police also recovered a knife, a brick and a bike used in the crime by the suspects. The police said, “Our investigation revealed that eight persons were involved in the murder of Sanjay Yadav, of whom six have been identified while the identity of two suspects is not known.”

The trio was produced before the Kharar court today, which remanded them in five-day police custody. According to the police, the suspects who are at large have been identified as Balwant, Rohtash, alias Bhaya, and Chaandu, besides two unknown persons.

Chaandu had allegedly attacked Sanjay with a knife, said the police. During preliminary investigation, the police found that various cases of fight had been registered against Balwant, Bhaya and Chaandu at police stations in Chandigarh.

Sanjay Yadav, a resident of Badmajra village and native of Uttar Pradesh, was killed on Saturday night near his house. The assailants had fled from the spot on three bikes after committing the crime. The incident occurred when Sanjay saw three persons urinating near his house. As he objected to their act, they started abusing him and a scuffle broke out between them following a heated exchange. The drunk assailants then repeatedly attacked Sanjay on his legs with a knife. They also hit him on his head with a brick. A case under Sections 302, 450, 148 and 149 of the IPC has been registered against the suspects at the Balongi police station.