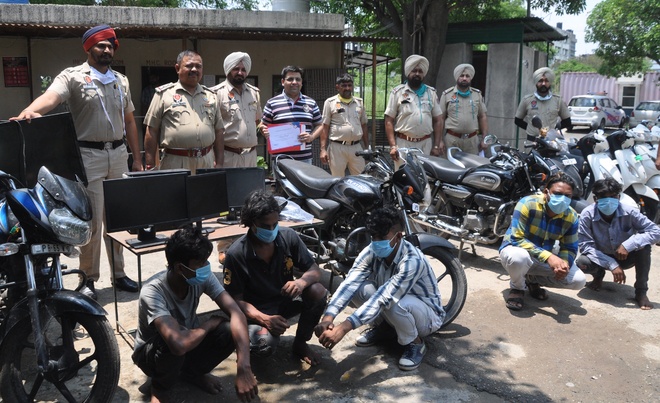 The suspects in police custody on Tuesday. Tribune photo: Vicky

The police have arrested three thieves, who had allegedly stolen various laptops, mobile phones and two-wheelers worth several lakhs from the tricity, and two fraudsters, who allegedly duped banks and innocent people, in two cases.

According to the police, Ajay, Sarvesh and Kamlesh were involved in various thefts in the industrial area of Mohali during the lockdown period of three months.

ASI Avtar Singh, in-charge of the Industrial Area police post in Phase 8-B, said, “Vijay Kumar, a scrap dealer, has also been booked in the case. He is at large. We hope to arrest him soon and recover more stolen items from him.”

A case has been registered against them under Sections 454, 457, 380 and 411 of the IPC. The suspects were produced in a local court, which remanded them in two-day police custody.

In another case, Vimlesh and Bimal were arrested for allegedly duping several persons on the pretext of selling them two-wheelers, financed from banks on fake ID cards and addresses.

Phase I SHO Manphul Singh said, “The suspects had duped HDFC, Yes Bank and Indian Bank by furnishing fake identities of migrant people to secure loans for vehicles. They had purchased four vehicles each from Pinjore and Mohali and two each from Panchkula and Chandigarh by duping banks. The vehicles were later sold to innocent buyers.”

“We have recovered eight unregistered two-wheelers, including seven Activa scooters, so far. A few accomplices of the suspects are at large,” said the SHO. A case has been registered against them under Sections 420, 465, 467, 468 and 471 of the IPC. The suspects were produced in a local court, which remanded them in three-day police custody.

According to the police, a case of theft was already registered against the suspects at a police station in Chandigarh.