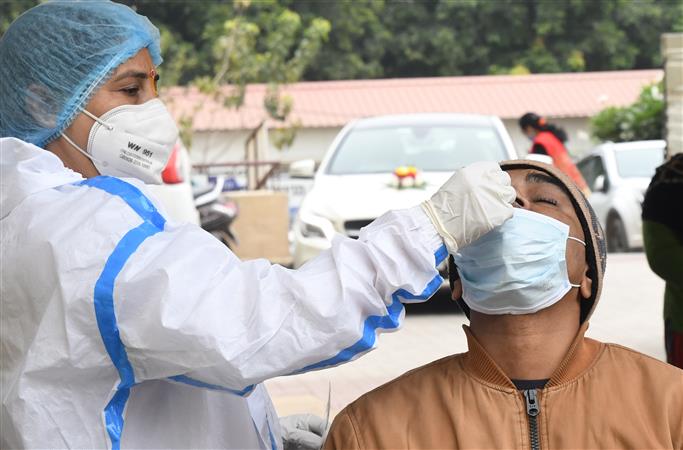 A sample being taken at the Panchkula Civil Hospital. Ravi Kumar

Four students and two teachers of Class V of a private school tested positive for Covid-19 today. One student of the same class was found positive three days ago following which the entire class and teachers were tested. The private school has been closed till Sunday.

Dera Bassi SMO Sangeeta Jain said, “Testing of contacts is being done. The parents of the kid found positive earlier have returned negative.”

Officials said it was yet to be known from where the kid contracted the virus.

The number of total cases in the district has once again taken an upward trajectory after Diwali. With each passing day, the Covid cases are increasing in the district.

Fourteen new Covid-19 cases were reported, while five patients recovered from the virus. Among the new cases, six are from Dera Bassi, three each from Dhakoli and Kharar and one each from Boothgarh and Gharuan. Of the 68,971 positive cases reported from the district so far, 67,845 patients have been cured. There are now 54 active cases. The toll stands at 1,072.