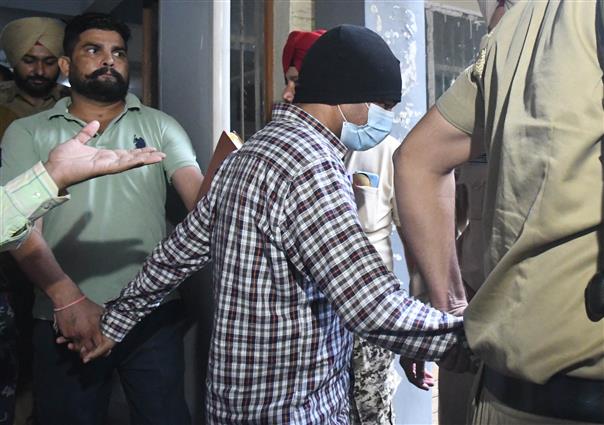 The fourth suspect, Army man Sanjeev Singh (29) of Samba, was produced in the court after being arrested from Sela Pass in Arunachal Pradesh on September 24 and brought here on a two-day transit remand.

The seven-day police remand of the three other suspects ended today after which the court extended their remand by five days. The police had sought remand of all four as they wanted to cross-examine the suspects together, given that the Army man was arrested only on Saturday. Also, the CFSL report had not yet been received, said an SIT member.

During the questioning, the police will try to ascertain how many videos were made and who all were involved. Suspect Rankaj Verma has applied for bail. The plea will be taken up on Tuesday.

Suspect Sanjeev Singh is accused of calling up and sending messages to the girl, asking her to click more photos and videos, said the cops.

Earlier, 23-year-old Rohru youth Sunny Mehta, 31-year-old Rankaj Verma and 23-year-old CU student were arrested under Sections 354-C of IPC and the IT Act after massive protests erupted amid allegations of videos of students being made in the hostel washroom on September 18. The Chandigarh University authorities, however, dismissed the allegations as “false and baseless”. — TNS

Rankaj has no link to others, says Counsel

Counsel for suspect Rankaj claimed his client had no correlation with the other suspects. The three other suspects have said in court they do not know him.

After teaching was suspended for six days following massive protests, the CU opened on Monday for final-year students. The second-year students are likely to join classes on September 29 and the first-year pupils in the first week of October.