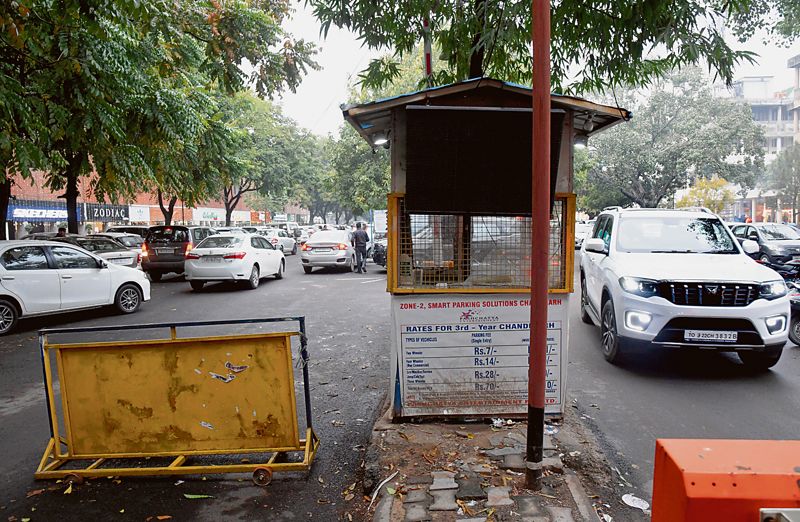 As many as 57 parking lots at Sectors 7, 8, 9, 17, 22 and Sukhna Lake have gone free with the Zone II contract of agency Pashchatya Entertainment Pvt Ltd ending today. Photo: Ravi Kumar

As many as 57 parking lots at Sectors 7, 8, 9, 17, 22 and Sukhna Lake have gone free with the Zone II contract of agency Pashchatya Entertainment Pvt Ltd ending today.

The lots are expected to remain free for around three months till a new agency is allotted the tender. Four-wheelers were being charged Rs 14 and two-wheelers Rs 7 for using the parking spaces. Visitors can now use these lots for free until a new contractor is given charge.

Further, the contract for Zone I, comprising parking lots in the southern and eastern sectors such as 20, 26 and 34, ends on March 31. However, it is expected the existing contractor will get an extension, till a new agency is allotted the work, as there are no dues on his part.

The MC had allotted 89 (32+57) paid parking spaces in Zones I and II on a licence fee basis through two e-tenders, initially for three years in 2020. The period of licence is initially three years and is extendable up to five years based on performance.

The MC is currently planning to introduce the FASTag-based system, besides a smart app at all 89 parking facilities.

Drivers of vehicles without a FASTag will also be able to pay using Paytm, Google Pay or other payment scanners. Currently, attendants issue parking slips and collect payments manually at all parking lots.

FASTag system on the anvil

The Chandigarh MC is planning to introduce FASTag-based system, besides a smart app, at all 89 paid parking facilities. Vehicles without FASTag can pay using Paytm, Google Pay or other payment scanners