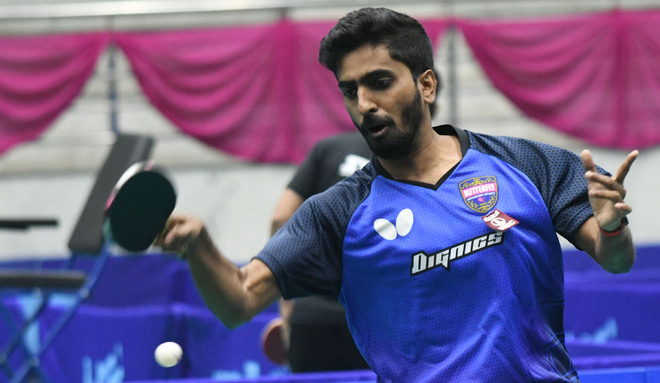 A player in action during the TT championship at Tau Devi Lal Stadium in Panchkula on Sunday. RAVI KUMAR

As many as 60 players qualified for the main draw after three rounds of stage 1 of the 82nd National Table Tennis Championship at Tau Devi Lal Indoor Stadium.

However, only 12 among 24 players from the last groups could get a chance to rub shoulders with the seeded players.

Tamil Nadu’s Abinay Vijay Babu will have a chance to play the top-seeded Sharath Kamal in his next round. Jeho Himnakulhpungheta from Mizoram will clash with second-seeded G Sathiyan.

In the round of 128, Ashwin Subramanian of Maharashtra outwitted Gujarat’s Dhariya Parmar to win 3-2. In his next round, Subramanian will take on sixth-seed Sushmit Sriram, also a player from Tamil Nadu, but a TTFI wildcard entrant here.

When the open draw took place in the morning, former national champions — Sharath Kamal, Anthony Amalraj and Soumyajit Ghosh — were packed in the first quarter itself. The second quarter of the draw has other seeded players in Ronit Bhanja (5), Sudhanshu Grover (12), Jubin Kumar (13) and Manav Thakkar, the fourth seed.

Even in the sixth, it was touch-and-go. After deuce, the left-hander struck at the first opportunity to pick the crucial two points. The other seeded players had it easy against their opponents, including No. 1 seed A Sharath Kamal, G Sathiyan, Harmeet Desai and Manav Thakkar. — TNS