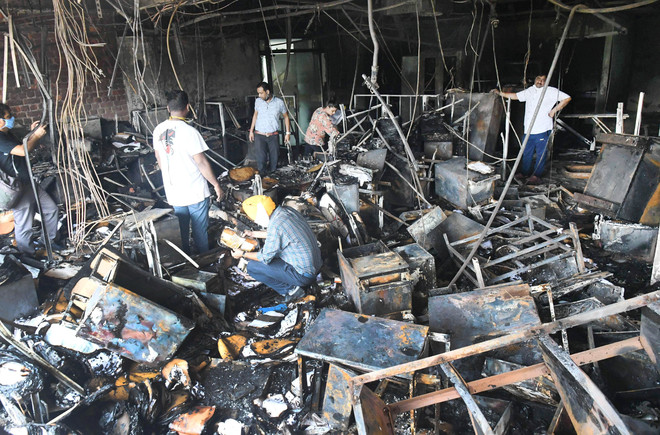 Staff of the Finance and Planning Department, Punjab, look for files in a gutted hall after a fire in Sector 33, Chandigarh, on Saturday. Tribune Photo: Manoj Mahajan

A fire broke out on the first floor of the building of the Department of Planning, Punjab, housing the establishment branch in Sector 33 this morning.

According to fire officials, almost all items kept on the first floor hall were destroyed. There were different chambers/rooms in the hall. Iron almirahs, computer, AC units, fans, window glasses and official documents were burnt.

“Our 70 per cent of the total files kept in the Yojna building were burnt in the fire,” said an official of the Planning Department.

Firemen said they got a fire call around 6 pm. Several fire engines were pressed into service from the fire stations of Sectors 32, 17, Ram Darbar and Industrial Area. It took about five hours to control the fire.

An official of the department said it seemed a short-circuit caused the fire. However, the fire officials said they were yet to ascertain the cause of fire. — TNS