Exhibition at Chandigarh Art Gallery: A tribute to greenery : The Tribune India

Exhibition at Chandigarh Art Gallery: A tribute to greenery 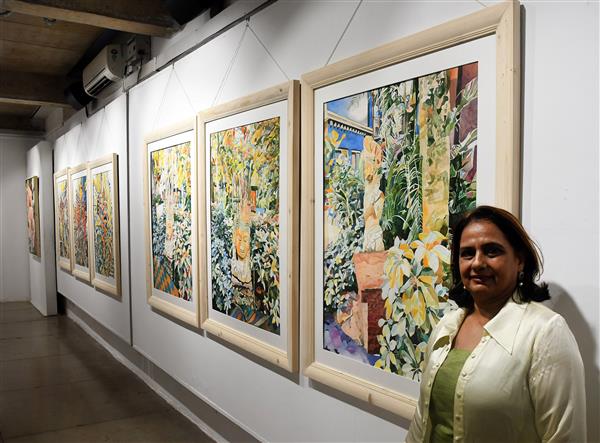 Dolly Dhillon with her paintings at Government Museum and Art Gallery, Sector 10, in Chandigarh on Tuesday. PHOTO: NITIN MITTAL

Dolly Dhillon (Dawinder Kaur Dhillon), an artist from Vishakhapatnam (Vizag), Andhra Pradesh, is exhibiting her latest work at an exhibition, titled "By Natural Design" - a solo show of watercolours and prints - at Government Museum and Art Gallery, Sector 10. The exhibition will be on view from August 24 to 28.

It was inaugurated by Gurdeep Singh Seehra, Director, GNA Gears Ltd and president and pro-chancellor, GNA University, along with his wife yesterday.

Dolly has tried to put out a message to save trees and appreciate nature. In total 60 artworks are have been put up wherein Dolly has dabbled with multiple mediums in watercolours and print. In print, she has touched every aspect from etching to woodcut, woodcut oils and mezzo tint (a medium where a copper plate is rocked with a tool called rocker and then printed). There are also six installations of wooden bark which the artist says she has frozen with multiple coats of resin and used a golden foil to represent how trees are the real accent.

She said, "The importance of trees, forest and greenery acts as accent since it stands out and has a value to add in the luxury called life rather than gold, which, many feel, is synonymous to luxury."

It is Dhillon's two years of routine labour that she has put on display for the art lovers of Chandigarh.