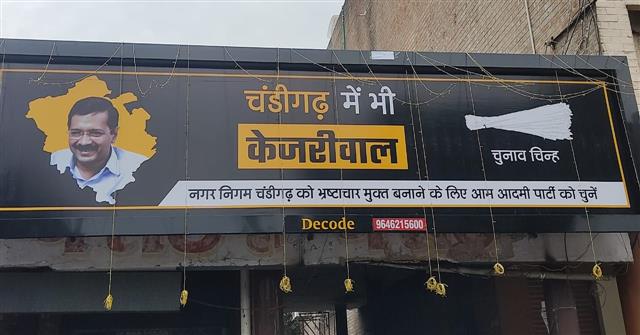 A hoarding put up by AAP in Chandigarh for the MC poll.

The Aam Aadmi Party (AAP), it seems, believes in reaching out to the public through big hoardings and advertisements. The city unit has already taken 41 advertisement sites on rent to garner support for the MC poll.

Taking a lead in capturing advertisement space on hoardings in the city, it has hired 5,500 sq ft from an MC-approved private agency. The party has already started displaying ads.

A party leader said on the lines of the Delhi AAP, this was their “professional” way to reach out to the public. Till now, other political parties have not captured this space.

“We also do it in Delhi. This is our professional style to advertise and convey our message to the masses. We do not believe in adopting other methods such as distributing liquor. We will also release jingles on city issues to reach out to the public,” said city AAP convener Prem Garg.

The ads have slogans like, “Chandigarh mein bhi Kejriwal...bhrastachar-mukt corporation....” The ads also display party guarantees such as providing 20,000 liters of water free of cost.

“Through our hoardings, we will highlight the issue of ‘wasteful expenditure’ such as the Sector 17/16 underpass, issue of running of parking lots and around 46 per cent water wastage here,” he said. The party has got permission from the State Election Commission to till December 21.

On the other hand, the city BJP’s focus these days is on releasing short videos on various development funds. City BJP president Arun Sood, MP Kirron Kher and others have been tweeting these videos. These are being made on smart schools, bird park, new underpass, 24X7 water supply project and others.

Meanwhile, Congress chief spokesperson HS Lucky said, “We are not hiring any hoardings. Our ad is directly reaching the people. AAP is doing it because it has no base in the city.”