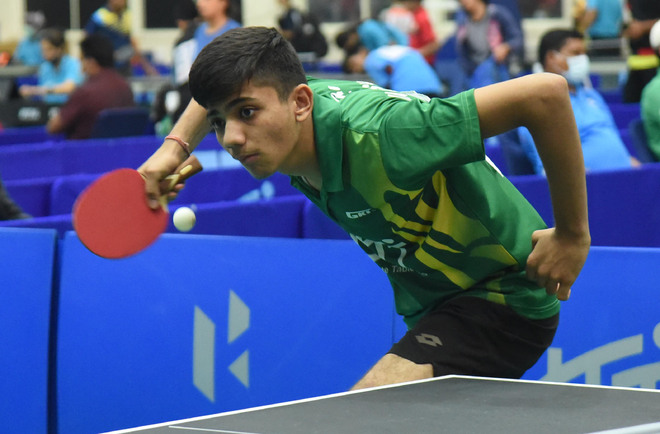 A player in action during a table tennis match at the Multipurpose Sports Complex, Sector 78, in Mohali on Wednesday.

Jennifer defeated Sandika Bhattacharjee of West Bengal (4-2) and Abhinand followed suit with an identical score line to beat statemate Balamurugan Muthu. Abhinand opened well to falter, allowing Balamurugan a comfortable recovery. But he could not sustain against the consistent onslaught from Abhinand and, despite his brave efforts, ended as the runner-up. What changed the fortune in Abhinand’s favour was his laboured wins in the fifth and sixth games on extended points.

Jennifer, cadet nationals champion in 2019, made a bright opening against second seed Sandika Bhattacharjee. However, the West Bengal girl staged a nice comeback to lead 2-1. In fact, the fourth game gave Jennifer confidence and brought some sanity to the haphazard game plan she dished out in the previous two games. By the time the fifth game began, the match was going only one way.

In the girls’ category, the top seed bowed out when fourth seed Jennifer Varghese outplayed to win (4-1). The Tamil Nadu girl was visibly hampered and could not come to terms with Jennifer’s attacking approach. Hansini did take a game off her rival, but it was too little and too late. Second seed Sandika Bhattacharjee showed character to take the last two games on her way to the final after trailing (3-2).