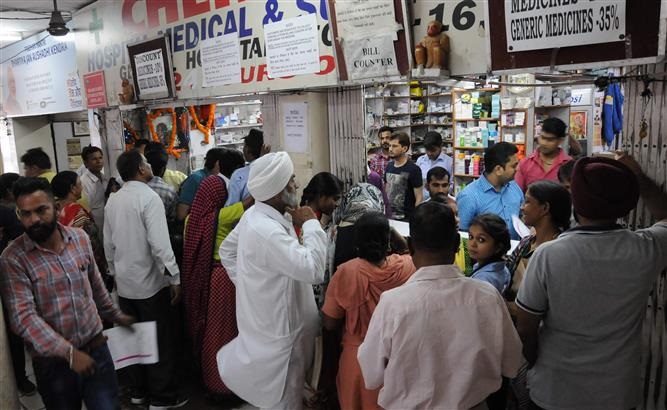 The sole chemist at Government Multi-Speciality Hospital-16 had been in business for the past 29 years using extension. File

The UT Health Department has withdrawn the 2002 notification of the Finance Department that allowed extension of shops in health facilities of Chandigarh.

The action comes after Chandigarh Tribune highlighted how a sole chemist shop on the Government Multi-Speciality Hospital-16 premises had been operating through extension for the past 29 years.

“All advises/communications/ directions issued by the then Health Secretaries of the Chandigarh Administration regarding extension of licence/lease campus/premises of any of the health facility of the Chandigarh Administration on the basis of the Finance Department notification dated April 19, 2000, are hereby withdrawn,” read the order issued by the Health Department.

“All shops/booths/canteens on the campus/premises of any of the health facility of the Chandigarh Administration to be immediately reviewed and corrective measures taken, with the approval of the competent authority,” the orders further read.

The Health Secretary has also ordered for fresh arrangements of licence/lease of such shops/booths/canteens on the campus/premises of the health facilities of the Chandigarh Administration through competitive bidding process.

“Allowing the same person/firm to continue with the lease/licence and not adopting the transparent bidding process on a regular basis has been objected to by the CAG Audit, indicating a huge loss to the government revenue because of such extensions instead of the due process of tendering,” said Yashpal Garg, UT Health Secretary.

The UT Administration had yesterday constituted a fact-finding committee to go into extension granted to the chemist and wrongful increase in the shop size.

The district court had ordered the Health Department to initiate a fact-finding committee to probe alleged encroachment by the existing chemist.

As per preliminary investigation, inspection suggested the size of the shop, as per the drawings, was 151.87 sq ft, but it had been increased to 329.16 sq ft.