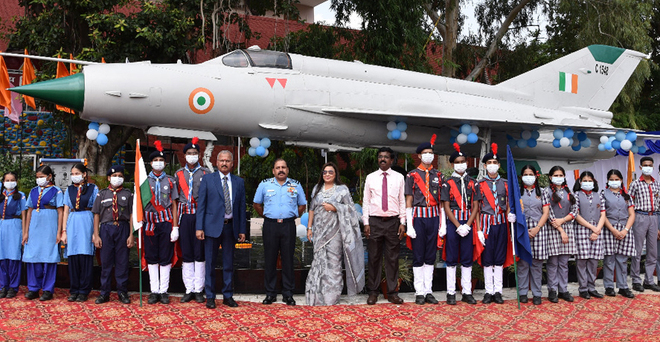 Air Chief Marshal RKS Bhadauria during his visit to Chandigarh.

Air Chief Marshal RKS Bhadauria, Chief of the Air Staff, visited Air Force Station here on September 6, which coincided with the 60th anniversary of the air base. On his arrival, he was received by Air Cmde Tejbir Singh, Air Officer Commanding, Air Force Station, Chandigarh.

The Chief of the Air Staff reviewed the ongoing capability enhancement and infrastructure upgrade initiatives at the station. He appreciated the role played by personnel of the station in accomplishing the heavy lift and air maintenance tasks in general and undertaking rapid air mobilisation during the contingency in eastern Ladakh.

He also visited Kendriya Vidyalaya, Sector 47, as a mark of gratitude for his alma mater and teachers. Earlier in the day, he addressed principals of 130 Air Force schools across the country through the virtual mode.

He also presented the airframe of a decommissioned MiG-21 fighter aircraft to the school, which has been installed in the institute’s forecourt. A number of his classmates were also present on the occasion.