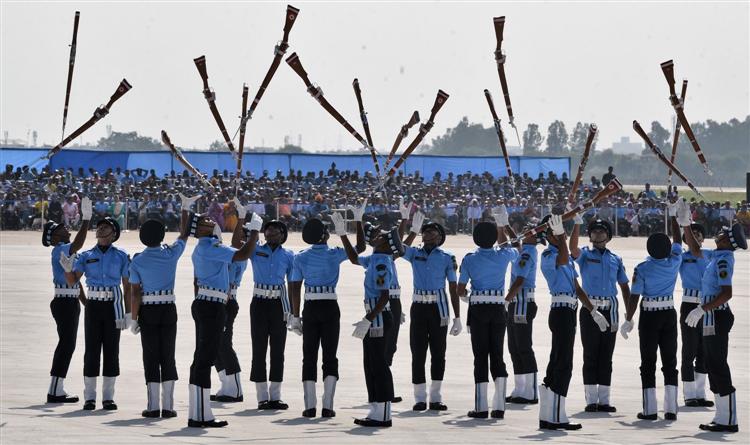 An IAF team performs during the full dress rehearsal ahead of Air Force Day parade, in Chandigarh on Thursday. Manoj Mahajan

The IAF today carried out a full dress rehearsal of the ceremonial parade and air display here to commemorate the 90th Air Force Day on October 8.

Traditionally held at the Palam Air Force Station in New Delhi and at the Hindon airbase in Ghaziabad, this is the first time the parade has been organised outside of the national capital region (NCR).

The Chief of the Air Staff, Air Chief Marshal Vivek Ram Chaudhari, will review the parade on October 8, while the President, Droupadi Murmu, will be the chief guest at the air show at Sukhna Lake.

Almost all types of fighter, transport aircraft and helicopter in the IAF inventory, as well as display teams such as the Akash Ganga skydivers, Surya Kiran and Sarang aerobatic units, Garud special forces and para-motors will be part of the air show.

The Indian Air Force was officially established on October 8, 1932, as an auxiliary air force of the British Royal Air Force.