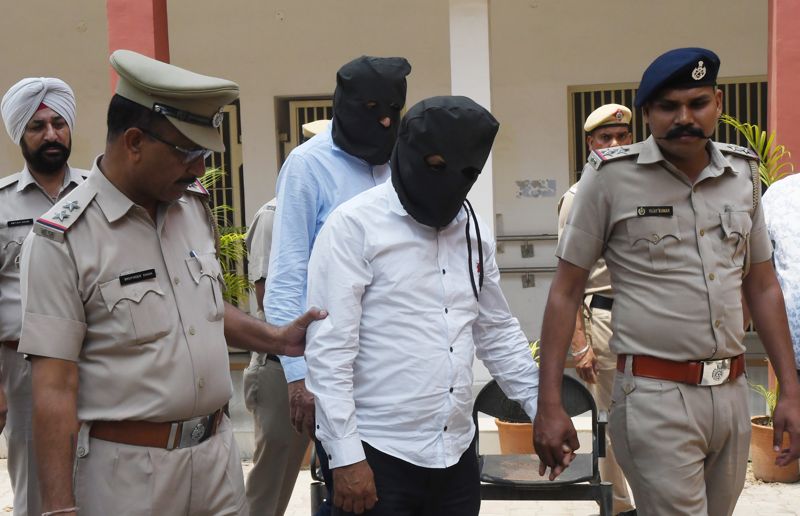 The local police have busted a gang of extortionists and have arrested three persons, including an ASI, who later escaped from police custody.

The trio was arrested during a raid conducted by Deputy Commissioner of Police Surinder Pal Singh. However, the ASI managed to escape from police custody with the help of two head constables.

The Police Commissioner, Panchkula, Hanif Qureshi, said Sanjeev Garg, a resident of Sector 4, in his complaint to the police, had stated that Anil Bhalla had demanded Rs 1 crore for getting a loan of Rs 100 crore for business and foreign travel. He said he had transferred Rs 45 lakh through RTGS and had asked Bhalla to give the loan amount. However, instead of giving the loan, Bhalla threatened to kill him and trap him and his family in “some case”. He said Bhalla took a Mercedes Benz car and a Fortuner from him after getting an affidavit that he had sold these for Rs 8 lakh. He said the affidavit signed by the notary did not have signatures of any witness. He said Akash Bhalla, son of Anil Bhalla, had “fled” in the Fortuner. Qureshi said an investigation was conducted by Assistant Commissioner of Police Vijay Kumar, who found the complaint to be correct. A case under Sections 193, 212, 384, 406, 409, 420, 467, 468, 471, 506 and 120-B of the IPC had been registered against four persons at the Sector 5 police station.

Qureshi said during preliminary investigation, it was found that Bhalla, who was into the business of finance, used to give money to “innocent people”. After getting them to sign on blank papers, he used to blackmail them. He used to threaten them and usurp their land and property and implicate them in false cases. He said in the investigation, the complicity of ASI Gurmej Singh had also been found.

He said after his arrest, the ASI managed to escape from police custody with the help of two head constables, Naresh and Rajbir. He said the two head constables had been suspended and a case had also been registered against them under Sections 223 and 224 of the IPC at the Sector 5 police station.

Suspects arrested during raid by dcp

Financier Anil Bhalla’s name figures in about 180 cases registered in Panchkula, Dhakoli, Ambala and Mohali. In 2021, he had defrauded a city resident of Rs 75 lakh. However, the victim dragged him to the High Court after which he returned the entire amount.