At PGI, the wait never ends : The Tribune India

At PGI, the wait never ends 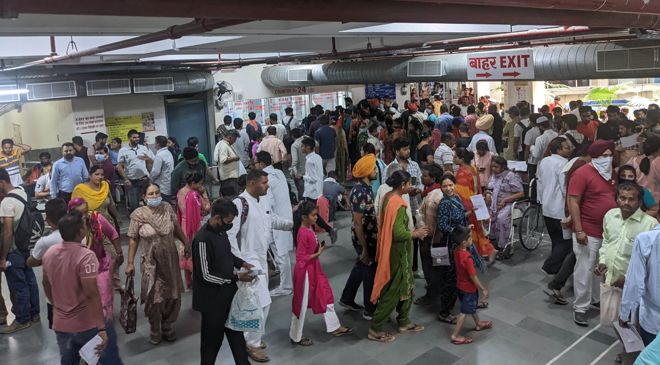 Huge rush at the OPD registration counters in the PGI, Chandigarh, on Wednesday. Photo: Manoj Mahajan

With over 9,000-10,000 patients visiting the OPDs every day, the PGI is weighed down under the immense load of patients waiting for their turn at the registration counters for getting appointment cards made, for making payments at counters and for the collection of reports.

In the early hours (between 3 am and 5 am), around 1,000-2,000 patients begin queueing up outside the New OPD Block and Nehru Hospital even when the gates are closed. The security guard concerned opens the gate at 6 am and allows the patients inside the hall where they wait for the counters to open up at 8 am.

Sandeep Kumar, who came from Saharanpur this morning, was standing in a queue for over an hour to make the payment for a CT scan. “It’s been one and a half hours since I have been standing in a line. The treatment here is satisfactory that is why I come here every time,” he said.

In some departments, the OPD registration timings are from 8 am to 10.30 am. In such a short spell, some patients are turned away as their turn does not come. “Every day, 100 to 150 patients have to return because the time is limited and even though we try our best, we are not able to adjust all patients who come here. We ask them to come again,” said a security guard, posted at the New OPD Block.

Neelam, who had chronic stomach pain, had been standing in a queue since 9 am for one and a half hours, but as soon as her turn came, the window of the registration counter was closed. She had to return. She had come from Jalandhar to see a doctor.

PGI Deputy Director Kumar Gaurav Dhawan said the institute was working on a queue management software through which long queues at different counters would be managed through a system that would alert patients about when their turn comes to see a doctor, based on their token number. The PGI was also working on introducing online payment wherein a QR code would be imprinted on OPD cards through which payments could be made. The newly approved Hospital Information System-2 would also take care of recurrent payments.

Patients first form a queue for the registration. If the doctor prescribes a particular test, patients have to stand in a queue to make the payment at a counter. There are 36 counter windows at the New OPD Block and the problem is almost the same at each window.