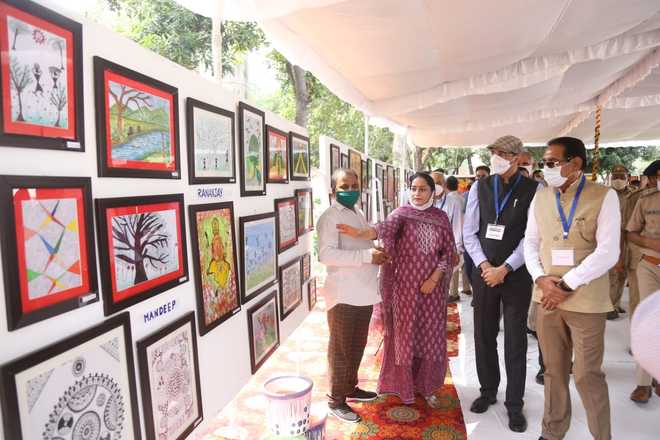 UT Adviser Dharam Pal, along with other officials, looks at paintings after inaugurating an art gallery at Model Jail, Burail, Chandigarh.

During the inauguration of a bio-gas plant at Model Jail, Burail, today, UT Adviser Dharam Pal exhorted the authorities to be self-reliant in energy generation.

Renaming of the barracks

The renaming of the barracks was started two years ago with the help of the Government College of Art, Sector 10, to inspire inmates by naming these after great personalities.

After commissioning a floating-drum type bio-gas plant of 200 cubic metre per day capacity, the Adviser said the jail authorities must meet their energy requirement by generating their own bio-gas or solar energy. “Let there be zero energy procurement by the jail authorities from the outside,” he added.

Installed at a cost of Rs19.25 lakh, including five-year warranty, the bio-gas plant was executed by the Chandigarh Renewable Energy and Science and Technology (CREST) in which10 tonne of cow-dung for both digesters are supplied daily for production of bio-gas. This project is economically beneficial to both the Chandigarh Administration and the jail authorities, said Debendra Dalai, Chief Executive Officer, CREST. The bio-gas produced is being directly used in the jail kitchen for cooking purpose which has cut down the jails LPG requirement to half. Further, the slurry produced after production of bio-gas is used as organic manure which helps in growing crops etc. in the fields.

The Adviser appreciated the efforts taken by CREST in developing the model jail as 100% self-sustainable with no dependency of outside sources of energy which will be the torchbearer for the whole of the nation.

The Adviser also inaugurated other projects namely renaming of barracks and art gallery.

At the art gallery, around 200 framed paintings done by inmates have been displayed besides around 150 unframed paintings. Apart from this, planter/pots have been painted in Madhubani and Warli style by the inmates. All paintings have been compiled in a book titled as “Colours - Harbingers of Hope and Happiness” which was launched by Dharam Pal.