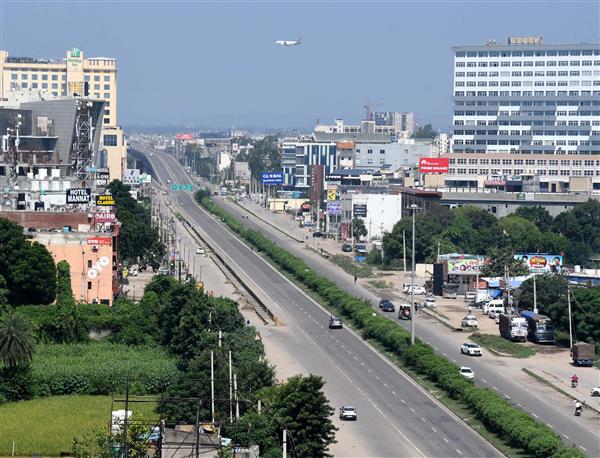 A complete bandh was observed in Mohali district today in support of the call of the Samyukt Kisan Morcha (SKM) for Bharat Bandh against the three farm laws.

The protesting farmers blocked the entry points to the district at Kharar, Banur, Lalru and Mullanpur near Siswan from 6 am to 4 pm.

The farmers also blocked the Chandigarh-Zirakpur border. Blockades were put up at the McDonald’s light point and the K-Area light point.

The traffic movement on the Chandigarh-Ambala highway was also hit with the farmers blocking the arterial road at the Dappar toll plaza in Lalru.

No vehicles, except ambulances and emergency services vehicles, were allowed to pass. The farmers also let air passengers, who were on their way to the Chandigarh international airport, to go through after checking their tickets. However, other passengers arriving into the district had to face harassment as they had to wait at the protesting sites for long hours.

Office-goers travelling to and from the tricity had a harrowing time criss-crossing the borders. The commuters had to take long detours and walk on foot to reach their destinations.

Some residents, however, found an ingenious way of commuting by cycle to avoid the blockades.

At the Chandigarh-Zirakpur border, police tailed the members of the farmers union to ensure that commuters were not harassed by the protesting youth.

Meanwhile, the bandh remained peaceful as the Mohali Beopar Mandal had extended an unconditional support to the farmers. No untoward incident was reported from any part of the district.

All government offices and banks were open but the attendance was thin.

All emergency establishments and essential services remained open during the bandh, she said. “The farmers assembled on the highways and other key roads since morning and the agitation remained totally peaceful throughout the district,” said Kalia.

“Elaborate security arrangements were made to instill sense of security among people,” she added.

While addressing the protesters, the farmer leaders said the farmers were sitting on dharna at the Singhu border near Delhi for the past 10 months against the farm laws.

More than 600 farmers have lost their lives during the protest and this will not go unnoticed, they said.

They also appealed to the farmers and workers to unite to wake up the “rulers from their deep slumber”.

“This is not just a farmers’ struggle, every citizen of the country needs to be a part of it,” said Harsukhinder Singh.