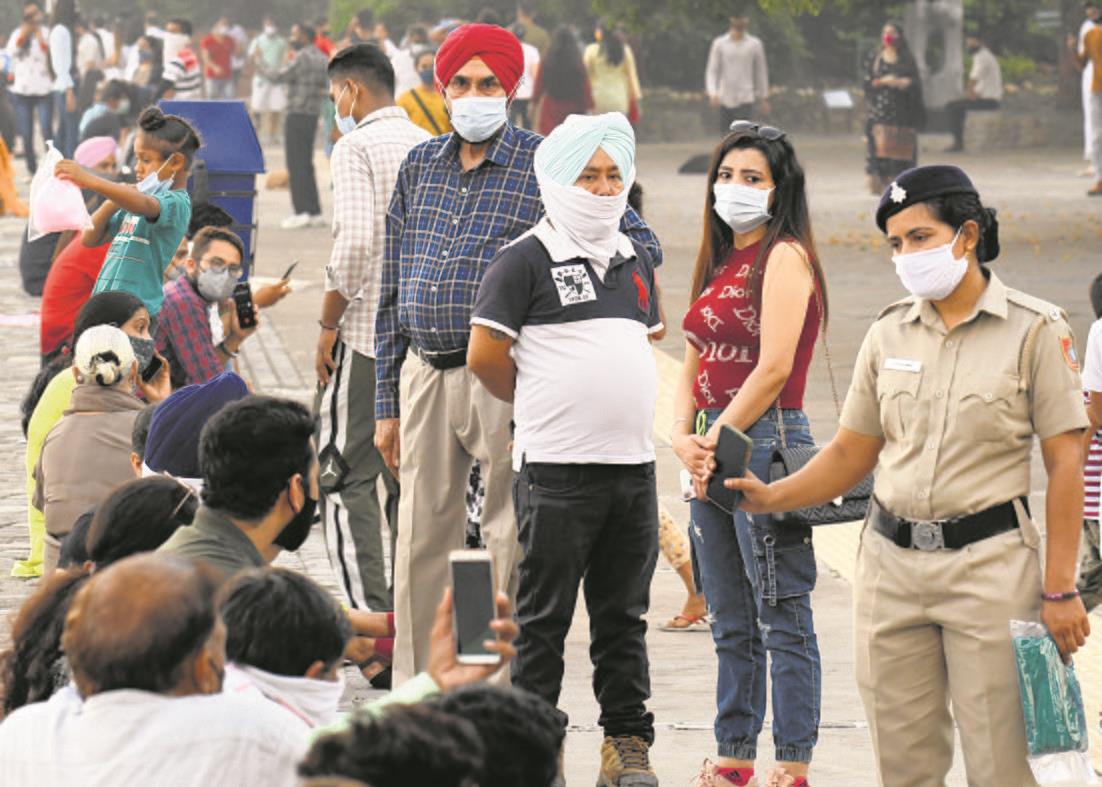 A cop warns a visitor, who was not wearing a mask, at Sukhna Lake in Chandigarh on Wednesday. TRIBUNE PHOTO: NITIN MITTAL

The city reported no Covid-19 case today for the first time since June 3 last year. With the UT being successful in tapering off coronavirus, it has also vaccinated 91 per cent of its population with the first dose of the Covid vaccine.

The first case was reported on March 18 last year with the return of a 23-year-old woman from the UK. Ever since, the UT has braved the first and second wave with the highest single-day cases of each wave being 449 cases (first) and 890 cases (second), respectively.

The Director, Health Services, Dr Amandeep Kang, said, “We had been waiting for this day for a very long time and I am glad it has arrived. A lot of efforts have gone into bringing the new case tally to zero in the city.”

Sharing the strategy, Dr Kang said, “We increased the RT-PCR testing share to 80 per cent and communicated the test reports to positive patients on the phone within 24 hours. This helped in early isolation of these patients. We did not stop making containment zones even after Covid slowed down in the region. We increased door-to-door vaccination drives in areas where cases broke out recently such as in Sector 38 where two families tested positive. The Administration is leaving no stone unturned to keep the cases under control.”

Chandigarh has lost 811 lives to Covid-19 so far. Last month, however, the city witnessed only two Covid deaths. The monthly fatalities have never been so low in the UT.

Dr Kang said it was due to rapid coverage of the population with the first dose of the vaccine. “The vaccine reduces hospitalisation and severity of the disease and hence we saw fewer deaths in the recent past,” she said.

The positivity rate of Chandigarh last week stood at only 0.2 per cent. For every 100 confirmed cases, 0.1 are currently infected, 99 have recovered from the virus and one has passed away from the virus.

So far, 5,256 of every lakh population in Chandigarh have tested positive for the virus and 52,409 samples have been tested.

There are 31 patients in Chandigarh currently infected with the virus, while all others have recovered. Of them, only six patients are hospitalised.

Mohali: Seven new Covid-19 cases were reported from the district on Wednesday. Nine patients recovered from the virus in the past 24 hours. Among the new cases, three were reported from Kharar, two from Dhakoli and one each from Mohali and Banur. Of the 68,468 positive cases reported so far, 67,379 patients have been cured. TNS

Panchkula: The district reported four fresh coronavirus cases on Wednesday, taking the overall tally to 30,647. With no fresh death, the Covid toll remained at 376. While 30,259 patients have recovered from the disease so far, 12 cases are still active. The recovery rate stands at 98.73 per cent. TNS