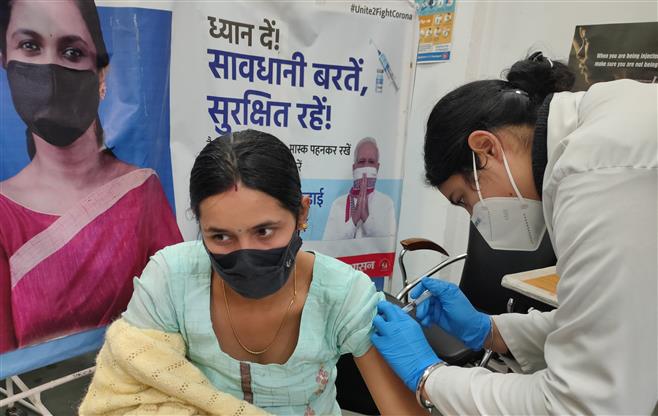 A health worker administers a dose of the Covid vaccine at the GMSH-16 in Chandigarh on Monday. Tribune photo: Pradeep Tewari

From over 1,500 daily Covid-19 cases reported a week ago to 564 fresh infections on Monday, test positivity rate and active cases also continued to drop in the city. It shows signs of the city moving towards a declining trend in fresh coronavirus infections. 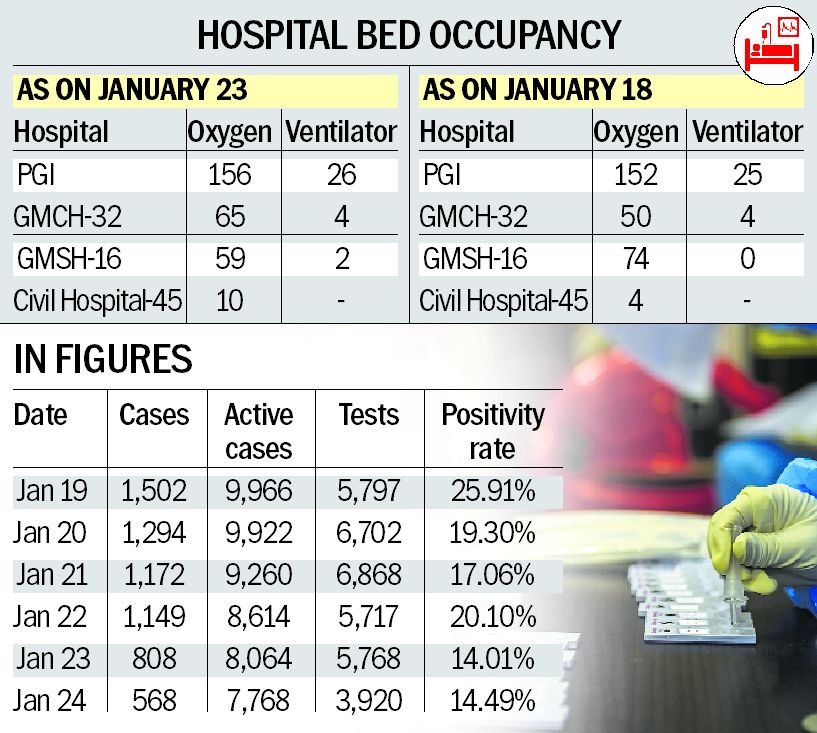 However, experts caution that it is not the right time to declare that Chandigarh is past the peak of the highly infectious third wave.

We saw daily cases declining and the number rising again twice so far. So, we would like to analyse the cases for a few days to ascertain whether the peak is over. — Dr Suman Singh, Director, Health Services

At present, the occupancy of hospitals has stabilised in the city and no rise has been seen over the past week. Around 290 beds are occupied in city government hospitals, while this figure was 280 a week earlier. This indicates that there has not been any significant rise in hospital admissions.

“We saw daily cases declining and the number rising again twice so far. So, we would like to analyse the number of cases for a few more days to ascertain whether the peak is over,” said Dr Suman Singh, Director, Health Services.

There has also been a decline in testing by 32 per cent from Sunday. The number of samples tested today was 3,920, while 5,768 samples were tested a day earlier. A positivity rate of 14.49 per cent was recorded today, which is marginally higher than yesterday’s 14.01 per cent.

Dr PVM Lakshmi, professor, Community Medicine and School of Public Health, PGI, said: “Generally, infection in the community starts dipping a week after a decline in infection among healthcare workers. The infection rate among health workers has already started declining at the PGI.”

She said: “For Chandigarh, we will still have to wait for the exact situation of peak as the cases reported on Monday are a reflection of tests on Sunday and generally people do not come for tests on weekend. If the cases continue to decline over a week, along with the positivity rate, it is only then we can say that the wave is on a downhill trend. So far, we can say that there is a slightly declining graph of Covid in the UT.”