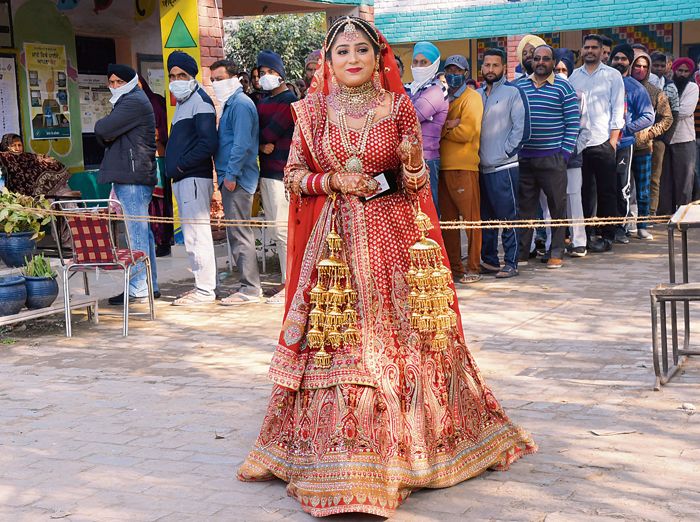 Arshpreet Kaur, a bride, comes out after casting her vote in Zirakpur on Sunday. TRIBUNE PHOTO: RAVI KUMAR

It was a big day for Zirakpur resident Arshpreet Kaur, who got married today. However, Sunday also being the polling day in Punjab, her first priority was to get the perfect bridal make-up, then came the lehanga, jewellery and the bride was good to go — to cast her vote at the Nabha Sahib polling station and later to solemnise the marriage.

Arshpreet Kaur said, “I have come to vote as I think it is our duty towards democracy in our country. I have come to vote so that education, employment and medical facilities are taken care of in our area.” With marriage season on and today being a Sunday, many such enthusiastic voters were seen in Mohali district who did not forget to exercise their franchise on the most important day of their life.

In Daon village, Dilpreet Singh (23) went one step ahead by taking the entire baraat (marriage party) with brass band near the polling station. After casting his vote, the groom then headed towards the gurdwara.

Gurpreet said, “Marriage is important but casting vote is also important. My friends made the plan to go with the band and baraat.”

In Saneta, a groom also made it a point to cast his vote before the marriage.