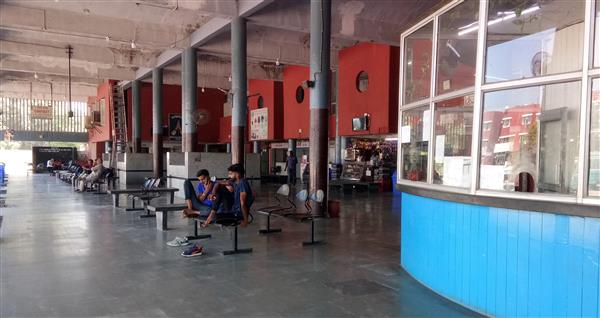 A near empty bus stand at Sector 5, Panchkula. RAVI KUMAR

The Bharat Bandh called by the Samyukt Kisan Morcha had little impact in Panchkula even as blockades were put on some routes in the district.

Markets in Panchkula remain closed on Mondays. Hence, the bandh had no impact on the business. Chemist shops and essential services remained open.

The farmers blocked the Chandimandir toll plaza on the Zirakpur-Shimla highway and the Jaloli toll plaza on the Panchkula-Yamunanagar highway. However, not many vehicles were seen playing on the two routes. Public transport also stayed off the road.

Kuldeep Chitkara, president of the Panchkula Beopar Mandal, said: “There was no impact of bandh on trade activities.”

Karm Singh, a local leader of the Bharatiya Kisan Union (Charuni), however, termed the bandh successful.

“People from all walks of life extended support to the bandh,” said Karam Singh.

The police had yesterday issued a travel advisory for commuters, asking them to take alternative routes and modify their travel plans in view of the expected road blockades. — TNS