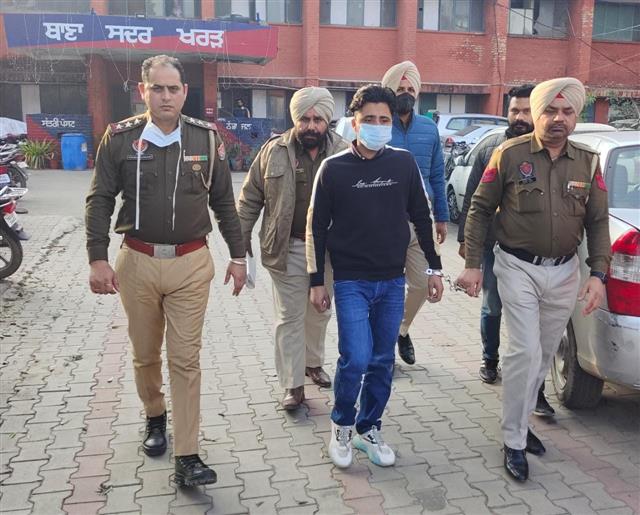 Happy Singh, alias Amy, in the custody of the Mohali police.

The Organised Crime Control Unit and the Mohali police have arrested an accomplice of the Davinder Bambiha and Sukha Duneke group, Happy Singh, alias Amy, a resident of Dohak village in Muktsar Sahib, and seized a .32 calibre foreign-made pistol along with six live rounds on the Chunni-Kharar road.

Happy Singh is a close accomplice of gangster Sukha Duneke, who is based in Canada and involved in major heinous crimes such as murders, kidnapping, extortion and carjacking in the Malwa region.

Happy Singh, along with his gang members Harry of Moud Mandi, Harry of Rajpura, Manpreet Singh, alias Samma, Avtar Singh Aulakh and Sabu of Goniana and Yadwinder Singh and Sona of Jandwali, are acting on Duneke’s command and executing murders, kidnapping, extortion.

During the investigation, Happy disclosed that he was involved in the kidnapping of a prominent doctor of Muktsar on December 20, 2021, when the couple had gone for a walk in the wee hours on the Thandewala road in Muktsar.

Amy, along with his accomplices, demanded a ransom of Rs1 crore to release him. They kept the doctor in their custody for more than three hours, then released him after taking a ransom of Rs25 lakh from his family. A case was registered on December 22, 2021, at the Muktsar Sadar police station. This was an untraced case.

Happy Singh said on the directions of Duneke, he provided weapons to the shooters who executed the killing of Manpreet Singh, alias Challa Sidhu, and Manpreet, alias Vicky, accomplices of deceased Kulbir Singh Naruna.

A case was registered on January 12 this year at the Nathana police station in Bathinda. Amy and his gang members are also involved in more than 10 criminal incidents in the state. Further investigation is on.