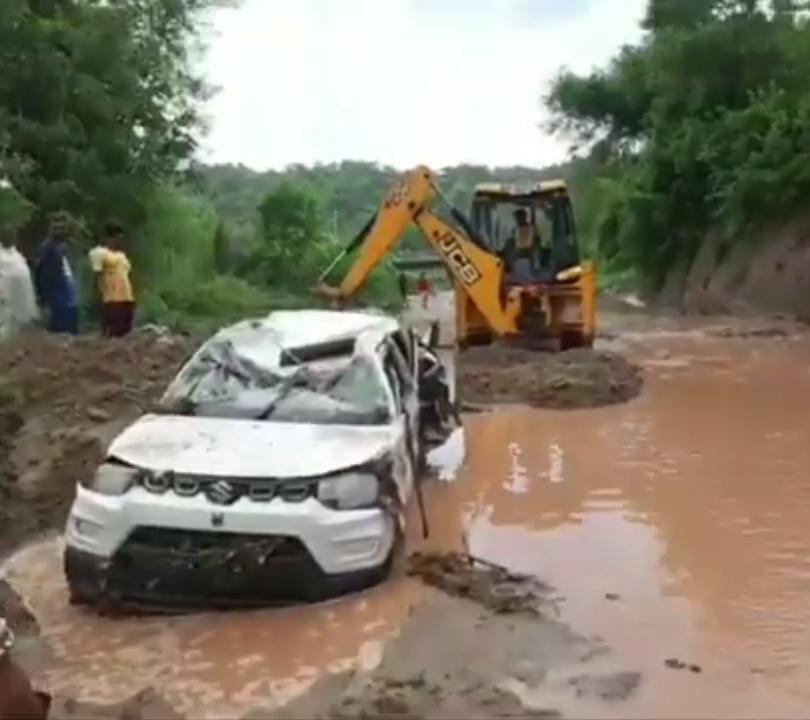 The mangled remains of a car that was washed away in Patiala ki Rao rivulet near Nayagaon on Wednesday.

Two youths and a woman were washed away while their taxi, with a Muktsar registration number, was recovered from the slush in Patiala ki Rao rivulet at Tanda village, near Nayagaon, this afternoon.

Village residents said the car driver tried to cross the rivulet while it was in spate. The car was dragged away by strong current of water to some distance. Efforts were on to find the missing persons.

Meanwhile, heavy rainfall threw life out of gear in several parts of Mohali district. The Chandigarh-Ambala national highway was flooded at several places in Zirakpur forcing the traffic to move at a snail’s pace near the Patiala chowk.

Residents said knee-deep water was seen underneath the flyover near the local bus stand. Long queues of vehicles were seen near the Metro point and Singhpura light points on the highway.

Commuters had tough time as they got stranded in long snarl-ups. Several school buses were stuck in the traffic jam, said residents. Inner roads of Zirakpur town remained waterlogged.

Rainwater entered houses in low-lying areas of Desumajra village in Kharar. Newly-inducted Cabinet minister Anmol Gagan Maan visited her office near pillar No. 15, underneath the flyover, but remained inaccessible to villagers who had come to seek a solution to flooding in their houses.

In Mohali, several low-lying areas were flooded. Long queues of vehicles were witnessed on the airport road. Vehicles were seen crawling early in the morning.

The situation was particularly worse in new sectors of Mohali. Parking lots and roads were submerged in Phases 3B1, 9, 7 and 3B2 markets. Councillors of respective areas made arrangements to drain out the rainwater.