Will observe trend for a few days to ascertain whether we are past the peak: UT 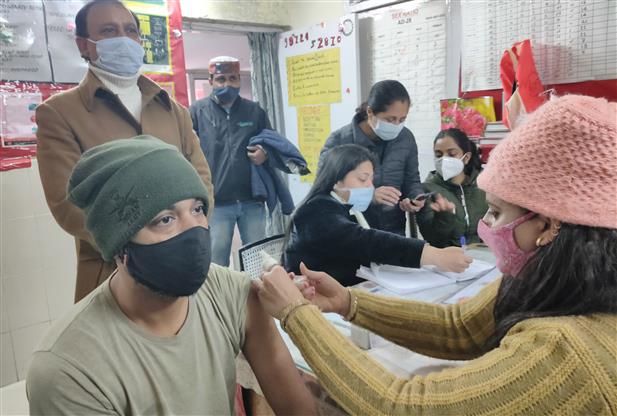 A boy gets the Covid vaccine at Government Ayurvedic Dispensary in Sector 28, Chandigarh, on Monday. Pradeep Tewari

The city reported its highest Covid-19 count of 1,834 cases on January 14 with a test positivity rate of 25.21 per cent after which there has been a steady decline for three days, leading to a figure of 864 cases today.

While lesser number of cases have been reported from the city in the past few days, testing numbers have also declined. The cases will be observed for some more days to ascertain whether Chandigarh has crossed the peak of the third wave. — Dr Suman Singh, DHS, UT

In the second wave, daily cases had peaked at 895 cases on May 9 with a positivity rate of 22. 7 per cent. The number of tests also dropped from 7,257 on January 14 and to 4,034 on January 17. This is in line with the latest advisory of the ICMR on testing that limits testing asymptomatic patients and low-risk contacts of a positive patients.

UT Adviser Dharam Pal said, “While there is a drop in tests, the TPR has also declined, suggesting that the city is showing a declining trend. Had there been a 26 per cent positivity rate or even higher today, it wouldn’t have been a decline. The number speaks for itself but we would like to wait for another three to four days to watch the trend. Delhi and Mumbai have shown similar trends in cases and have already started showing a decline. ”