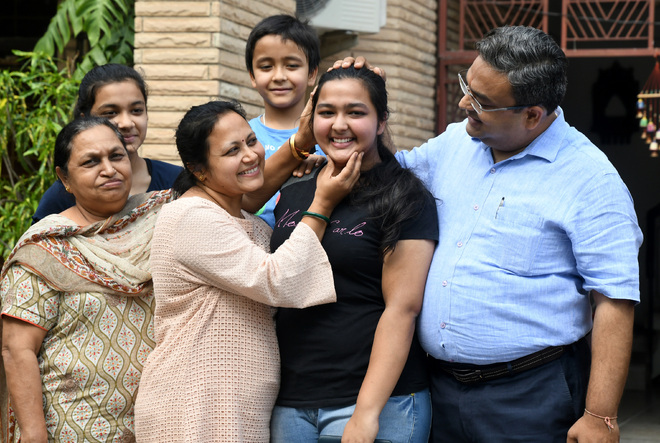 Vrinda Gupta from Bhavan Vidyalaya, Sector 27, Chandigarh, who bagged the second position in the tricity with 98.8 per cent, celebrates with her family in Panchkula on Wednesday. NITIN MITTAL

The city stands at the second last spot in the region in terms of pass percentage in the CBSE Class X results, which is a cause of worry for local educationists.

According to the regional data, UT’s pass percentage remained at 86.21, which is marginally better than Ladakh’s 86.02 per cent — the lowest in the region.

Though there is a huge gap between the numbers of students appeared, other states did quite well to remain ahead of Chandigarh.

Jammu & Kashmir is the top performer with a pass percentage of 98.29 and Punjab also fared well with 92.12 per cent (average).

“The Administration and private schools have to take this record into consideration. We have the second highest number of students in the region, as per the CBSE bifurcation. Having a vast infrastructure, management and expertise, we should have been on the top,” said an official on the condition of anonymity.