Delivery by post | Violations include speeding, jumping red light | More on the cards 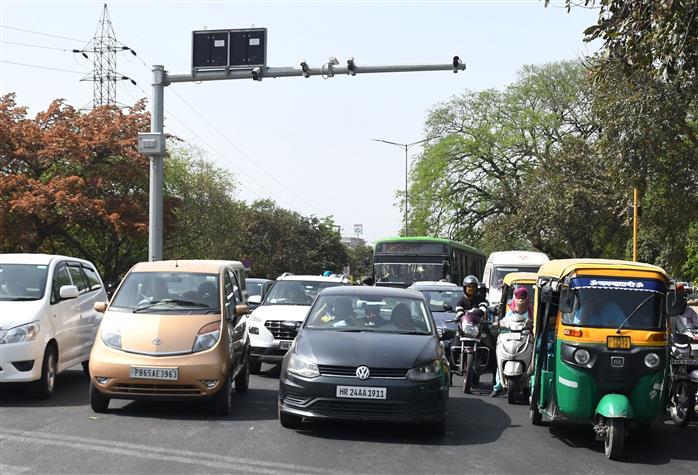 Think twice before violating any traffic rule in Chandigarh. The traffic police have started issuing challans for speeding and red-light jumping through the overhead CCTV cameras installed across the city. As many as 215 traffic challans have been issued by the police which will be dispatched to the violators’ addresses.

With Integrated Command and Control Centre (ICCC) at Sector 17 becoming operational, Intelligent Traffic Management System (ITMS) has been put to use in the city. The system, with the help of the CCTV cameras installed at various junctions, will automatically capture violations of speeding and red-light jumping. The police said 200 challans for speeding and 15 for red-light jumping had been issued. Soon, traffic violations, including stopping vehicle on the zebra crossing, driving on the wrong side and riding a two-wheeler without helmet will also be captured by these overhead cameras.

A total of 1,998 CCTV cameras have been installed in the city, of which 1,000 will be used for surveillance and the rest for the ITMS. Police officials said the ITMS had been integrated with an e-challan software of the traffic police. It will help the police to validate violations for the issuance of postal challans to the violators.

Till the time work at the Police Command Control Centre (PCCC) is completed, the traffic police personnel will operate from the ICCC where only a few seats have been allotted to the police.

“As soon the PCCC is made operational, a total of 15 police personnel will keep a watch at important locations in the city round the clock from there and issue challans on the basis of automatic detection of violations through smart cameras,” said a police official. There are some technical glitches which are being worked on with the help of Smart City and NIC officials, said the official.