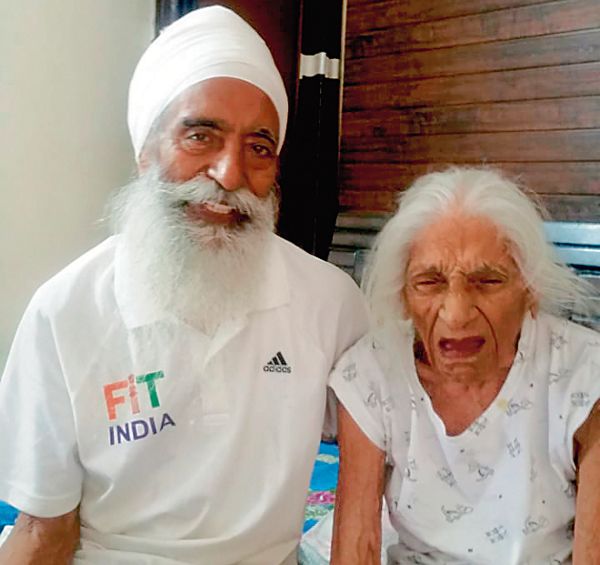 Mann Kaur with her son Gurdev Singh at their Sector 40 home.

“Old age is like a plane flying through a storm. Once you’re aboard, there’s nothing you can do,” these words from former Israeli Prime Minister Golda Meir say a lot about the struggles of centenarians when they start living with a deadly disease.

No one had ever thought that 105-year-old Mann Kaur, the veteran athlete who holds world record in various events in the 100 plus age category, despite following a healthy lifestyle and strict diet would one day be in the grip of cancer.

Mann was diagnosed with gall bladder and liver cancers in February. The centenarian is on liquid diet and has been pulling through the disease with the help of homeopathic medicines, as operation is not an option for the people of her age, said her 82-year-old son Gurdev Singh. Gurdev claimed he had approached Kayakalp Himalayan Institute for Yoga & Naturopathy, Palampur (Himachal Pradesh), and Sanjeevani Kaya Shodhan Sansthan, Gohana (Haryana), for her mother’s treatment “but they refused, probably due to her age”.

“Things have been tough. We don’t need any monetary help, but if these centres can help her recover (Mann) through naturopathy, it will be great. As of now, she is doing fine with the homeopathy medicines,” said Gurdev.

When contacted, one of the office bearers at Sanjeevani Kaya Shodhan Sansthan said they didn’t take patients over 70 years of age, while the Palampur-based institute has mentioned on their website that they don’t provide treatment to patients suffering from AIDS, cancer, acute cardiac diseases, tuberculosis and infectious diseases.

Asked about treating Mann through allopathy, Gurdev said: “Some representatives of a pharmaceutical company visited us. They offered us a machine which works on body cells, it’s like modern chemotherapy. The machine costs around Rs1.5 lakh. However, considering her achievements, they offered us to give it for Rs70,000. I am still in discussion with them.”