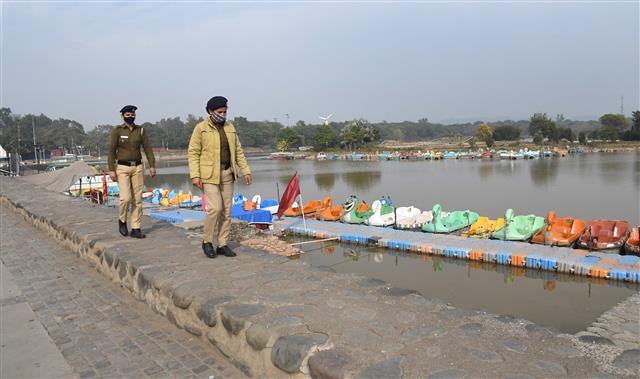 In order to prevent large gatherings, the UT Administration has decided to close the world-famous Rock Garden and the recently opened Bird Park amid a sharp rise in the Covid-19 cases in the city.

The decision was taken at a review meeting presided over by UT Administrator Banwarilal Purohit.

According to an order issued by UT Adviser Dharam Pal, both Rock Garden and Bird Park, which attract a large number of people, not only from the region but also from other states, will remained closed from January 4 until further orders.

Any breach of the order will invite action under Sections 51 to 60 of the Disaster Management Act and Section 188 of the IPC along with other applicable laws.

During the meeting, the Administrator said the Covid-19 situation would be reviewed regularly. He asked officials to ensure proper oxygen supply and availability of beds in hospitals, intensify testing and enhance vaccination to combat the situation.

Prof GD Puri, PGI, said they had 250 Covid beds, of which 48 had been activated. Dr Suman Singh, Director, Health, said 606 isolation beds for asymptomatic and mild cases were available at the GMSH, Sector 16, and 50 had been made functional. Dr Jasbinder Kaur, Director-Principal, said 250 oxygen beds and 80 ventilator beds were available at the GMCH, Sector 32. All institutions have adequate oxygen supply for Covid patients.

Yashpal Garg, Secretary, Health, said they had already procured buffer stock of essential medicines for Covid. Chandigarh has 53.8 metric tonnes of oxygen available in health institutes in the city, whereas the requirement is of 49.5 metric tonne. He said there was sufficient Covid vaccination stock for both adults and children.

The UT yesterday decided to close all activities at Sukhna Lake from Monday to Saturday. However, a few hours relaxation for morning and evening walkers was given from 5 am to 9 am and 6 pm to 8 pm for six days. The lake will completely remained closed on Sundays.

Chandigarh: The city on Monday reported 75 fresh cases of Covid-19 and no death due to the virus. As many as 13 patients were cured of the disease. TNS

Panchkula: Thirty-five Covid cases surfaced in the district in the past 24 hours, taking the tally to 31,093. No new death was reported, while five patients recovered from the disease. Of the 31,093 cases reported from the district so far, 30,550 patients have been cured. There are now 162 active cases. The death toll stands at 381. — TNS

30 cases in Mohali district, no death

Mohali: Thirty Covid cases surfaced in the district in the past 24 hours, taking the tally to 69,274. No new death was reported, while four patients were cured of the disease. Among the new cases, 12 surfaced in Mohali (urban), three in Kharar, four each in Boothgarh and Dera Bassi, and seven in Dhakoli. There are now 190 active cases. The death toll stands at 1,075. — TNS 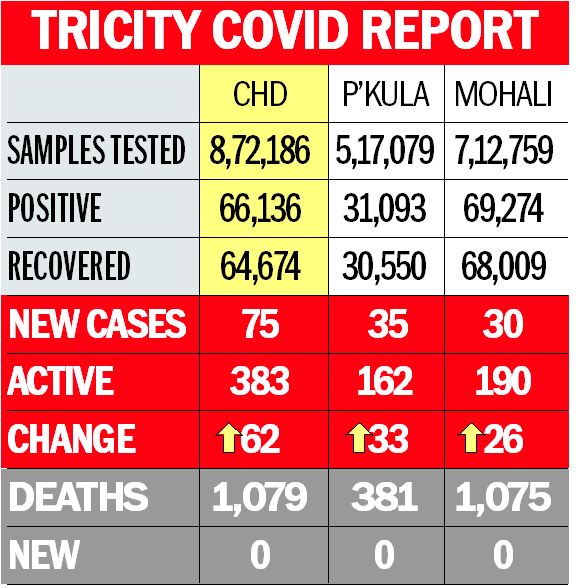