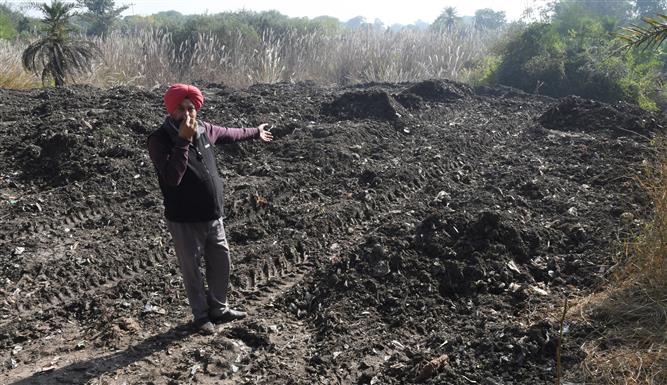 Bio-soil dumped by the MC in an open area in front of residences in Sector 50, Chandigarh, on Wednesday. PHOTO: RAVI KUMAR

In a move that has left city residents fuming, the Municipal Corporation has started dumping bio-soil, produced after processing legacy waste at the Dadu Majra dumping ground, at 11 locations across the city.

According to an official order, SMS Limited is executing the work of biomining of legacy waste at the dumping ground. During the processing of garbage, bio-soil is produced. This is to be transferred to 11 locations for filling of low-lying areas of green belts in the city.

Chandigarh Smart City Limited has asked the civic body to depute nine tippers along with a JCB for the job.

The waste was found dumped in an open area in front of a residential area in Sector 50. Residents have raised concern over the move, saying the area would turn into another dumping site and cause foul smell.

“We condemn the MC move to dump residue near the residential area. Thousands of residents are affected by the foul smell in the Sector 50 and 63 area,” says Avtar Singh, president of a Sector 50 society.

Reeta Goyal, secretary, Bankers’ Society, Sector 50, says: “The stench is unbearable. What kind of processing is this? It makes no sense to lift garbage or its residue from one place and dump it at another. Residents are protesting the move as there is unpleasant smell in the area.”

Rajesh, another area resident, says the MC should not only stop dumping waste/residue here but also fence off the open ground from all sides to prevent people from dumping garbage and keep anti-social elements at bay.

Area councillor Rajesh Sharma told Chandigarh Tribune: “No dumping ground is being built here. The bio-soil has been kept here only to fill the low-lying area for the adjoining green park. The smell will go away in a few days.”